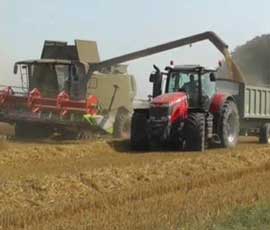 More settled weather should bring a return to harvest this weekend, with farmers keen to clear up remaining crops.

Over the past week, harvest had made slow progress, with wet weather meaning growers cut just 3% of the combinable crop area.

That brought the total harvest to 92% complete by Tuesday (17 September), according to the latest ADAS / HGCA report, leaving spring barley, wheat, oilseed rape and pulses left to combine.

In Yorkshire, contractor Chris Smith was waiting for a dry break in the weather near Easingwold, so he could combine the final 30ha of April-sown winter wheat.

Harvest had been extremely variable, but overall, wheat and winter barley had yielded about average, with spring barley and oilseed rape exceeding expectations, he said.

“Surprisingly, the April-drilled winter wheat has done nearly as well as you’d expect from crops drilled at the proper time – many have done around 7.4t/ha and quality has been excellent.”

In Wales, Meurig Raymond had still got 93ha of spring-planted winter wheat to cut at Trenewydd Fawr, Haverfordwest, Dyfed, as well as 12ha of spring beans.

“The wheat is only just coming ripe – it will be interesting to see how it yields, given it was planted in the last 10 days of February,” he said. “It’s short, but the heads look promising.”

Santiago and Diego winter wheat had yielded well, averaging about 9t/ha at almost 80kghl, and ranging from 7.4t/ha on light land to 12.4t/ha on stronger soil.

Further south, Tony Higgins had finished harvest at Middlegate Farm, Pitney, Somerset, and was very disappointed with his yields.

“We managed to get most of the winter wheat drilled in the autumn, but it suffered from the continuous wet weather, and then the hot June hit crops exceptionally hard on our stoney brash soils,” he said.

Claire, Diego and Santiago wheat averaged about 6.8t/ha, with spring-drilled winter wheat yielding 5.6t/ha. “It actually paid better than the winter-sown crops as the spray bills were less.”

In Kent, late-planted Westminster spring barley performed exceptionally well at Hinxstone Farm, Benenden, Kent, despite being sown as an afterthought.

“We were meant to plant winter cereals but didn’t get them all drilled,” said Graham Westacott.

Planted on 5 May with a view to feeding it as a wholecrop, the first 16ha yielded so well that he left the remaining 4ha to combine – and got a surprising 7.4t/ha.

Tybalt spring wheat, sown after maize, also did well, yielding 6.8t/ha. “All the spring crops did well – but the winter wheat was very patchy.”