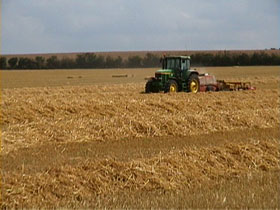 Harvest is all over bar the few last fields across the country, with the Indian summer enabling farmers to catch up after a torrential August.

In North Scotland, there were just a few oats to cut, said Simon Barry of Highland Grain.

“We were quite worried that the quality would suffer after the torrential rain, and the crops did lose a bit of colour, but the quality held up and we’ve had no problems at all.”

A preliminary survey of members revealed that winter wheat and oilseed rape yields were about average, with spring barley yielding above average, he said.

Yields had been about average across Southern Scotland and the borders, with quality holding up reasonably well, said Scotgrain’s Trevor Harriman.

“The vast majority of harvest is now in – and for us, in the main, we are quite happy with quality.”

In Cork, Ireland, harvest was almost complete, with just a couple of wet fields to tidy up, said Nicholas Dunican of Cork Combines, Valley Farm, Belgooley.

“What a difference a fine week makes – we finished the spring barley last week at 14% moisture.”

In Shropshire, bean yields were proving pleasing, but pea quality was mixed, according to Stuart Dolphin at Wrekin Grain.

“Harvest is about done and dusted and we’ve had some nice bean samples that will make reasonable premiums.”

“We did get left behind somewhat, but the better weather has enabled a lot of people to catch up.”