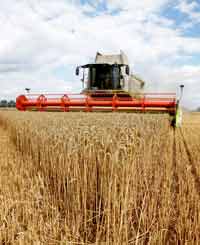 Milling wheat quality is excellent in East Anglia, but quality and progress elsewhere are somewhat variable.

John Whitelam, marketing director of Fengrain, said wheat harvest was about halfway through in Essex, and 10-15% complete in Lincolnshire

“The cereal crop has not been affected by the weather – it is still standing and we haven’t found any mycotoxins.

“Generally speaking, the quality is average to above average – I would have thought millers will be able to maximise their usage of British wheat.”

In Lincolnshire, John Lucas hoped to get into his winter wheat this afternoon, having been being rained off after cutting a headland yesterday.

“It is still over 20% moisture, but I’m hoping to get on later today.” So far the Oakley had yielded reasonably well, and Cordiale was just about ripe.

Further north, Keith Snowball had made a start on winter wheat near Brandsby, Yorkshire, averaging about 8.2t/ha (3.3t/acre).

“Wheats don’t look as though they’re going to break any records,” he said. “And as with every crop we’ve combined, the big disappointment is the price.”

In Northamptonshire, Steve Tarry was ploughing today, having finished his winter barley and oilseed rape at the weekend, with thrilling OSR results.

“It was a phenomenal crop – its ability to side branch into bare patches has been amazing.”

Harvest was about 15% complete in the area, but wheat was not yet ripe.