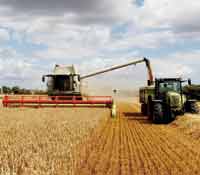 The East-West divide is becoming increasingly apparent, with farmers in East Anglia blazing through harvest, while those in the West struggle on.

Fengrain’s John Whitelam said most farmers in East Anglia were likely to have finished harvest by the weekend.

“What a difference a week makes. The crops are drier – they’re now below 15% moisture, so they’re easier to combine.”

Cereal quality was exceptional in Norfolk, and harvest was about 65% through in East Anglia, said Andrew Dewing of Dewing Grain.

“We’re having a great harvest. We’ve had a 99.9% success rate with winter malting barley, and it’s a similar story on the springs.”

Wheat quality had been equally good, averaging 13.1% protein, 76kg/hl and decent Hagberg numbers. “I haven’t seen any problem with Hagberg at all.”

But in central Southern England half of all spring barley was failing malting tests, said Mike Clay of Hampshire Grain, with split skins and fusarium to blame.

Farmers were about three-quarters of the way through spring barley harvest in the area, and just 10% through the wheat.

In Somerset poor yields and tricky weather had made this the worst harvest ever at Richard Payne’s Manor Farm, Heathfield.

Although the early drilled wheat had yielded reasonably well, later wheat was disastrous. “Everything was compromised from the word go.”

Farmers in Scotland were also struggling with showery weather, according to Highland Grain’s Simon Barry.

Spring barley harvest was about 5-10% through, and quality was excellent so far. “But it’s drizzling today – we’re champing at the bit and ready to go. It’s just frustrating.”

In Lincolnshire harvest was about three-quarters complete, and yields had been excellent, said Simon Schaanning of Honey Pot Grain Storage.

“There are a lot of people asking for extra storage on both oilseeds and cereals.”