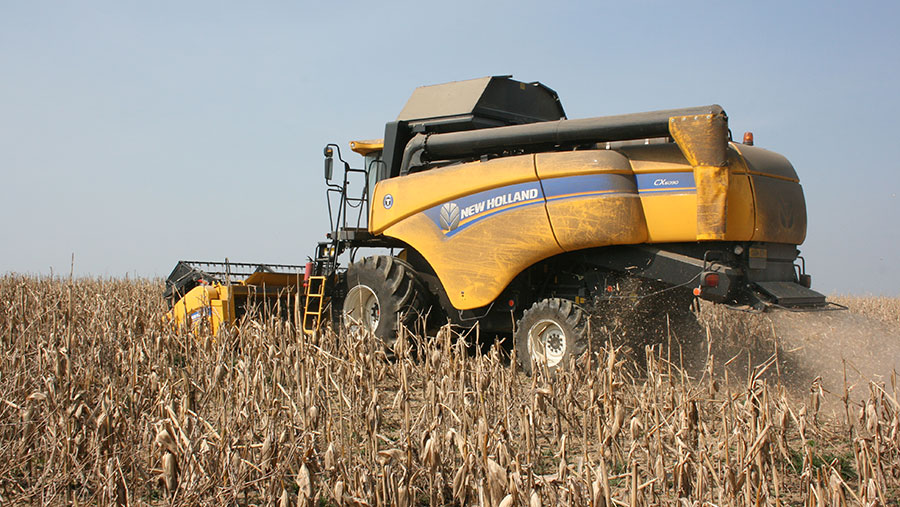 Combines were rolling this week… to finish off a severely delayed maize harvest in the Midlands.

Last year, Ian Peebles had a 7.7ha field of maize at Barrel Hill Farm, Pillerton Priors, Warwick, to make into silage to feed his cattle.

At the end of October, they tried to harvest the crop but the field was far too wet. The first trailer took four tractors to eventually pull it out, they gave up and abandoned trying to get the crop off the field.

See also: Pros and cons of growing maize or alternative forages this season

This spring, Mr Peebles had intended to chop the crop and plough it in. But after speaking with Tom Sabin, a contractor from Hook Norton, the pair decided to combine the field as the improved weather meant conditions were dry enough.

He managed to cut 6.07ha and harvested 27t of grain at 14% moisture. The grain was split equally between the farmer and contractor, who will each feed it to their own cattle.

Neighbour Stephen Treadgold took photos of the New Holland combine harvesting the crop. He said: “We farm on clay soils and in the autumn it was horrible.

“When they went back in again this time, the ground was so hard that there wasn’t even a wheel mark left from the combine.”

The crop was harvested in a week when many farmers were out drilling this year’s maize crop.

If a maize crop is grown for combining, yields of between 8-10t/ha are expected in a good season.