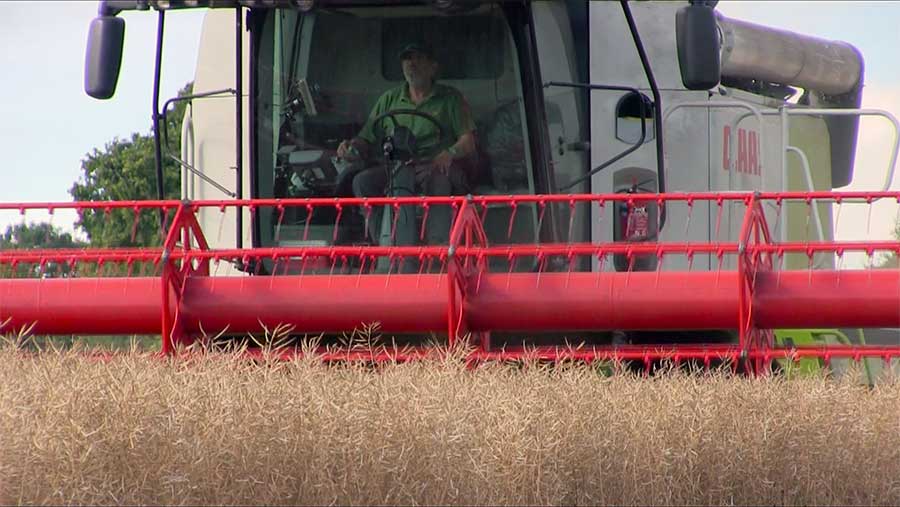 The oilseed rape harvest is bringing a smile to one grower’s face who farms just outside Winchester in Hampshire, as yields over the weighbridge hit 4.5t/ha.

Hopes of strong rapeseed performance were being downplayed as a result of a “bone dry” season says Sam Burge, who farms as part of a family partnership at Vale Farm on the edge of the South Downs, some 10 miles from the south coast.

But when Mr Burge started combining his 35ha of the conventional variety Barbados on Friday (14 July) at 8% moisture, he pleasantly surprised.

Initially, the crop was yielding an estimated 4.2t/ha, which is roughly average for the farm, but once the whole crop was put over the weighbridge the figures were better than Mr Burge anticipated.

“As a variety Barbados has been great to grow, it has been bone dry this season and I’m really pleased. This year nothing looks too sensational, but it’s better than last year,” he told Farmers Weekly.

The crop is being grown for United Oilseed and once the harvest is finished, he will move into early drilled spring barley, which is likely to be ready to combine later this week while his winter wheat is turning fast.

Watch the video of day one of Vale Farm’s oilseed rape harvest below.

This season Mr Burge experimented with applying a pod sealant prior to the desiccation spray, rather than applying both together to see what effect this would have at harvest.

“We trialled going through a week before desiccation with a pod stick. At the time the crop was still green and waxy so when we passed through with the desiccant the crop didn’t shatter as much,” he said. 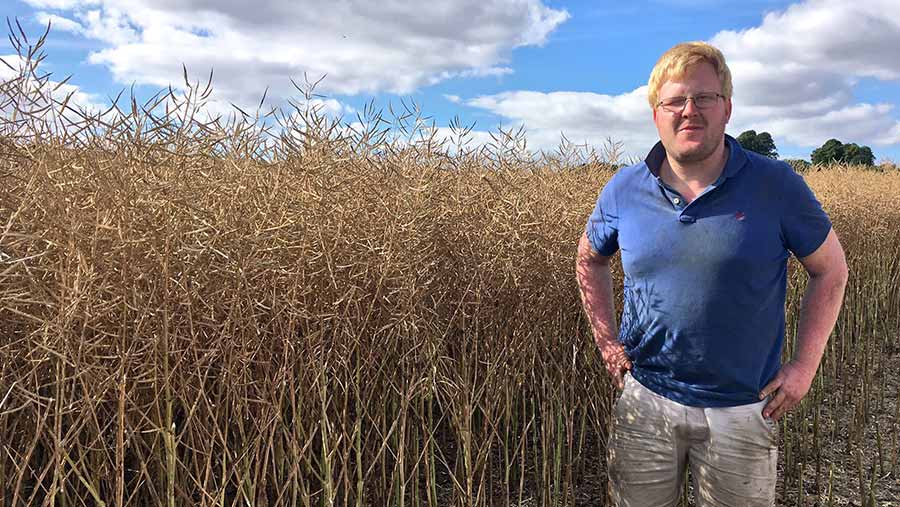 While the trial worked well in comparison with the tramline which got a desiccant/pod sealant spray mix in one pass – with the crop holding up well when 38mm of rain hit just before harvest – Mr Burge thinks making two passes with the spray rather than one probably isn’t practical.

Watch the latest videos of harvest 2017 in action.

His 31.2ha of heritage winter malting barley variety Maris Otter which Mr Burge also grew this season did not perform as well as hoped, with yields being disappointing.

“We’ve had 7.5t/ha in a good year and 5.5t/ha in a bad year and I think we are nearer a bad year,” notes Mr Burge, which falls below the farm’s long-term average of about 6t/ha.

The 52-year old variety has very weak resistance to diseases such as net blotch and rhynchosporium by modern standards, and it is a relatively low yielder, with 5t/ha said to be a reasonable benchmark.

However, it earns a £50/t premium over feed barley and is sold to local merchant Robin Appel on a malting contract.

Throughout harvest, we will aim to use as many of your photos in the magazine and online as possible.