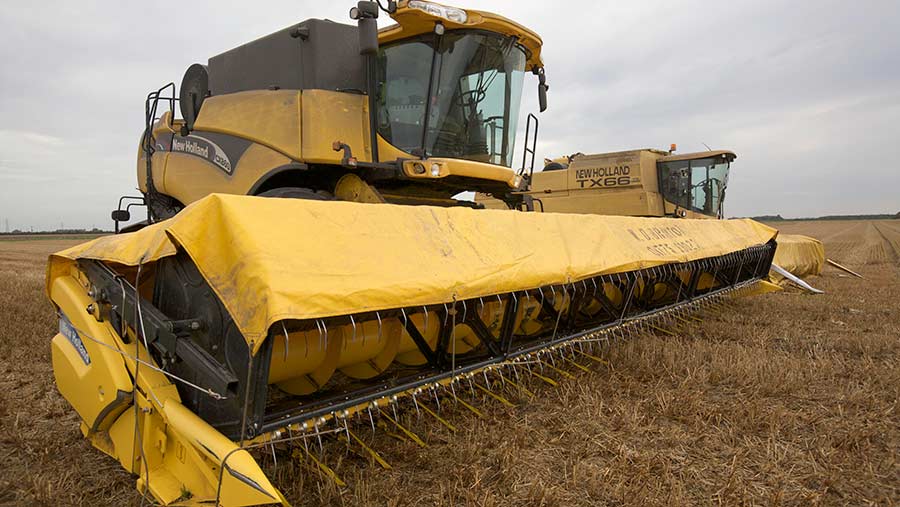 Wet changeable weather is frustrating harvest efforts in Scotland not helped by problems with spring barley not threshing easily from the awns.

Areas of spring barley, winter wheat and spring oats are still to cut north of the border, with more reports of grains sprouting in the ear following the weekend rain.

Quality has been reasonable, but maltsters have widened their nitrogen specification after concerns crop quality may fall short of targets.

See also: The 5 top-yielding winter wheat varieties in your region

Although most were managing to meet these new contract criteria, there were big problems with separating the awn from the seed, making handling more difficult, said Mr Barry

“With the dry weather, the crops have raced through their growth stages and the seed hasn’t broken off when combining – it’s a problem all over Scotland.”

Further south, the unsettled weather has slowed harvest for contractor Stuart Fuller-Shapcott, but he was in the last field of spring barley before heading into wheat and spring oats.

He has cut a small amount of wheat on lighter ground which averaged 6t/ha. “It had really died on its feet, but actually the yield was surprisingly good,” said Mr Fuller-Shapcott. Elsewhere, on stronger ground, it has averaged 9t/ha.

However, he has concerns over the further 60ha left to cut as it has started to sprout.

“Spring barley was a miracle this year – very late planted after the Beast from the East and in a matter of weeks it was baked in the sun,” he said.

“I was expecting pinched grains and low yields, but it’s not been as bad as I thought.”

Near Morpeth, harvest was nearly over with just 6ha of spring barley left to cut for Glen Sanderson at Eshott South Farm, after a successful wheat, oilseed rape and winter barley harvest.

“We’re just finishing Laureate which is very pleasing although the nitrogen is a bit high,” he said. Yields have reached 7.5t/ha so far.

“We thought the spring barley was going to suffer, but it was a delight to combine.”

The Skyfall and Grafton wheat averaged 9.9t/ha. “The wheat was definitely better than normal.”

The Alizze oilseed rape was particularly successful for Mr Sanderson this year at 5t/ha. “It’s been the best oilseed rape harvest in 48 years,” he said.

In Lincolnshire, WoldGrain was waiting for the last 3,000t of wheat and spring barley to come in, according to Dan Murphy, laboratory and haulage manager

Similar to other regions, quality has been good, but with mixed yields. “Some have reported above average yields on heavy land and others have had poor yields,” he said.

Anecdotally, pulse yields are down although the firm hadn’t seen any samples yet.

The firm had seen problems with red seeds early on in oilseed rape. “The red seeds were not immature, inside the seeds they were normal yellow – they just had a red coating,” added Mr Murphy.

Down in Somerset the bulk of harvest is over, with wheat yields closer to 8.6t/ha rather than the 9.8t/ha achieved last year, said John Collins, store manager at Cannington Grain.

Quality wise, there are good specific weights and the crops have been coming in dry so there arn’t any problems with moisture, he added.

However, logistics have been a problem for some stores due to so many crops arriving at once.