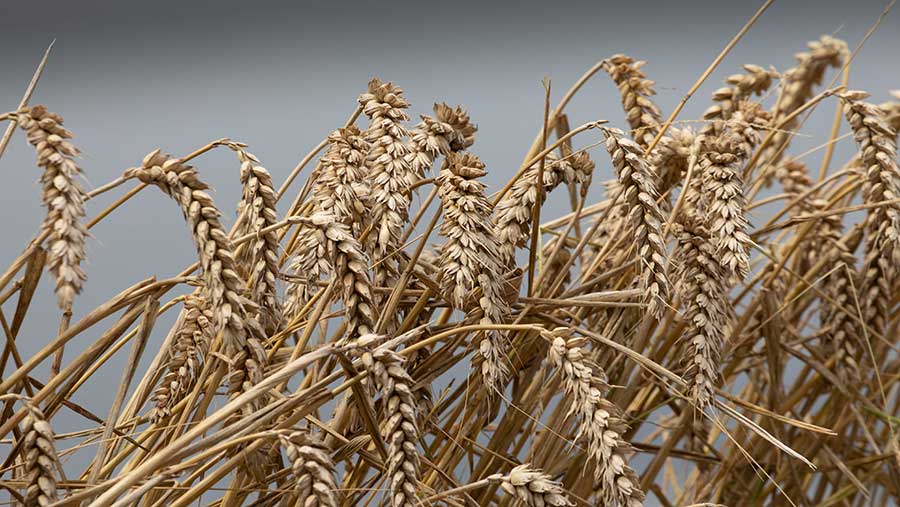 The past week has been largely a washout for many farmers combining between the showers, with many crops still standing and soggy straw lying in swaths still to bale.

There have been some reports of grain shedding, but there is some optimism that meaningful progress can be made next week with drier, more settled weather in the forecast.

Harvest has gone well so far for Josh Stratton at East Farm, Codford St Mary. “We just got the spring barley completed,” he said.

“It did very well with Laureate averaging 9t/ha and Planet 8.5t/ha – we are really pleased with it.”

Having managed to dodge the showers, he has made a start on his winter wheat, with Group 3 variety Elicit averaging 11t/ha and 80kg/hl.

See also: How two farmers hope to make better use of crop inputs

“I’m not sure of the protein and Hagberg and it’s come in quite wet at 19% moisture,” he said.

Mr Stratton’s remaining Elicit, Basset, Skyfall and Gravity wheat has only just come ripe and is looking really good – and he estimates there are a further 10 days of combining left.

Moving up the country, rain has halted harvest but forecasts are predicting a good week ahead for farmer David Pridgeon at Willow Farm, Skegness.

“It’s been a catchy harvest so far – we have probably done a third of the wheat – but we are just waiting to get going again,” he said.

He cut some wheat on Thursday (15 August) at above 20% moisture, but the crop is doing well.

“We have done Skyfall and Zyatt and yields, protein and quality are good. Skyfall has yielded up to 12t/ha but there has been some variability,” he said.

“The second wheats have done as well as, if not better, than first wheats.”

Mr Pridgeon has a further 304ha of wheat to cut, which will require two weeks of good weather.

“All of the wheat seems to be ready at once, so we have a lot of work ahead of us.”

His spring beans took a battering in the winds at the end of July and did break in half, but the same thing happened last year and they still yielded well.

Winter barley yields are good, but the nitrogen is too high for malting quality, while the oilseed rape is fairly average.

“The high erucic oilseed rape did better than conventional, despite being difficult to combine,” he said.

Heading towards Berwick-upon-Tweed, Jim Macfarlane is very pleased with his winter barley at Edrington Mains Farm.

“It’s a new malting variety, Electrum, and one field did over 10.4t/ha, with the nitrogen content and specific weight both fine and it didn’t skin too much.”

The oilseed rape is a really mixed bag. “The weather has done it in,” he said. “Anything standing yielded really well at over 5t/ha, but the flat bits are losing about a third of that.

“On the whole, we have been lucky as we haven’t had the flea beetle problems like further south, but it’s just a shame the tangled bits have hit the yield.”

The forecast for the coming week was looking much better, he said, but the ground underfoot was still very wet.

“It looks like some of the wheat is almost ready if it dries up, and the spring barley, which all looks well.”

Across the Irish Sea, wheat harvest has just begun for Richard Kane at Broglasgow House, Londonderry, despite wet conditions.

“It’s quite early for us to even be considering cutting wheat,” he said.

“Ground conditions were surprisingly okay, but the headlands were a bit spongy.”

“My neighbours’ crops are all looking quite well, but are starting to lodge in the rain.”

Before the wheat, he cut 50ha of Sparrow oilseed rape, which he is very happy with, achieving 4.2t/ha, and 65ha of Orwell winter barley, which yielded 8.4t/ha.

However, he has about 41ha of straw lying on the ground from this, which will need three dry days in a row before it can be baled.