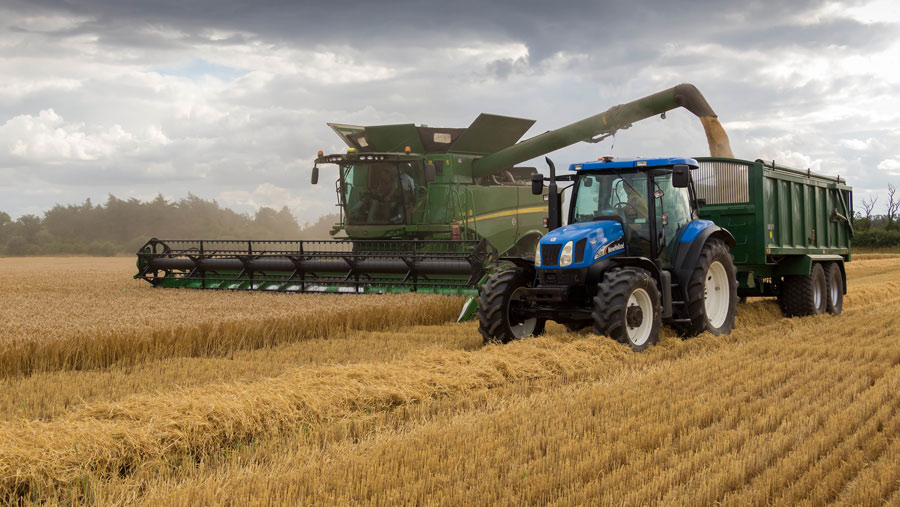 Combines have been out in force over the past week, with some rain-related grain quality issues emerging across the country.

Harvest started off well for Tim Lock at Houghton Farm, Arundel, but like elsewhere it did not go without its challenges.

“From 9-20 August, we had four inches plus of rain – up until that point, we had about 70% of the harvest completed. It wasn’t helpful and messed up some of the quality,” he said.

However, the dry spell over the Bank Holiday weekend gave a nice window and allowed Mr Lock to put the combine to bed on Tuesday (27 August).

He grew a mix of hard and soft winter wheat varieties including Illustrious, Elicit and Basset, with yields averaging 9.1t/ha but achieving over 9.9t/ha in some cases; a pleasing yield after the heavy downpour during peak harvest.

The farm also had 202ha of Planet spring malting barley, which averaged 6.8t/ha.

Further west, there are still crops to to cut, but harvest is finishing up for several farms including John Moss at Howton Farm, Saltash.

Discounting the two weeks of standstill, harvest had been good with higher than average yields, particularly in the winter barley, said Mr Moss.

“This year, we have grown Bazooka which averaged 9.3t/ha. We also grew Rafaela with interest in its Barley Yellow Dwarf Virus tolerance; it has yielded 8.3t/ha with a specific weight of 66kg/hl, while Orwell performed similarly in terms of tonnes per hectare,” he added.

However, grain prices are particularly disappointing. “Brexit is having significant impacts on the grain market. This year, we have produced above average yields on the majority of our grain, but the market isn’t there for the sale.”

Harvest has been a start-stop story in Wales, with mixed weather at Pantycoch Farm, Haverfordwest, which has seen Geoff Thomas struggling through crops flattened by coastal winds.

Libra and Flynn winter barleys yielded at least 7.5t/ha, and spring barley has been a success with Laureate averaging 7.4t/ha.

“After growing Laureate alongside Planet and Propino last year, we were impressed with its performance and decided to go all Laureate this year,” said Mr Thomas.

“Yield wise, it is jolly good, but what is exceptional is the moisture. We have had levels come back at 13.8% and 14.2% which – compared with more usual moistures of 16% – is saving substantial costs on drying,” he added.

Further north, localised weather is creating some variability in harvest, with Jack Parsons complaining of sprouting in his oilseed rape and wheat at Mertoun Estate, St Boswells, in the Scottish Borders.

“Last year was exceptionally good for us. This year has been good, but moisture levels have been variable across the farm. We are set up with a decent drying facility, so it hasn’t been too problematic for us,” said Mr Parsons.

The combine has been put to work on 300ha of Sunningdale and Orwell winter barleys, which yielded an impressive 10t/ha, while 150ha of oats came in with just average yield and quality. The 300ha of Mentor and Anastasia oilseed rape yielded a very pleasing 4.5t/ha.

Yields from 750ha of winter wheat – which is yet to be completed – have averaged 9.75t/ha.

“With a week of favourable weather, we could have harvest completed, but it’s catchy – we will see what the weekend brings.”