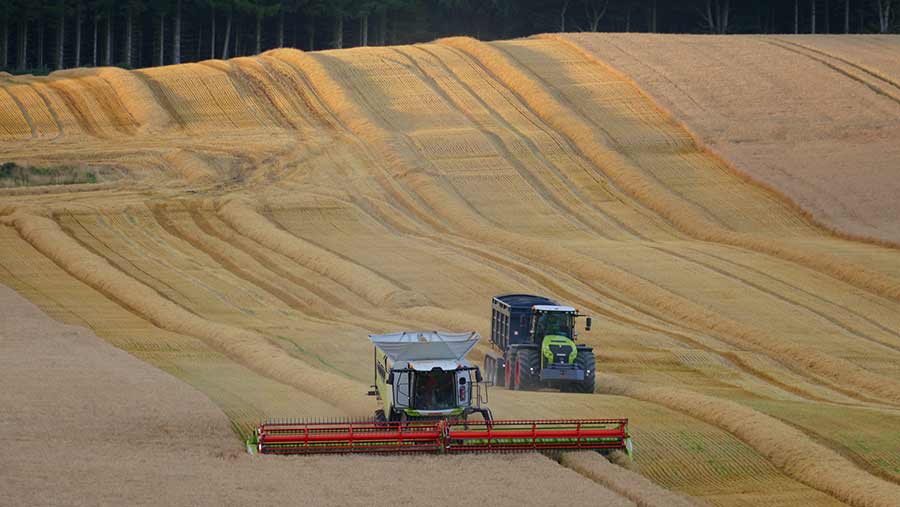 Many growers have finished harvest in southern England, but elsewhere they are still being frustrated by prolonged unsettled weather keeping combines under wraps.

In the west of the country, Geoff Thomas has been at a five-day standstill at Pantycoch Farm, Haverfordwest, with coastal winds and rain.

“The combine hasn’t moved since Sunday (30 August) – frustratingly, storms have lodged some our remaining spring barley. It’s now awfully close to the ground,” he says.

Secondary tillering has been problematic, explains Mr Thomas. “I have never had to spray so much Round Up pre-harvest,” he says.

The 36.5ha of winter barley – split between the six-row Libra and two-row Flynn – was mixed.

“We were pleased with the six-row, averaging 6.8t/ha – with specific weights predicted at the top end of the 60kg/hl,” he says. “The two-row was a little disappointing, below average at around 6.2t/ha.”

Fortunately, low moisture contents have kept drying costs down. “All crops have to date come in under 16%,” he says. “It’s unusual for us with a lot of coastal mist.”

Heading north, Richard Beachell is awaiting a break in the weather to combine the last 100ha at Field House Farm, Bainton.

“The contractor is hoping to get going tomorrow (4 September) if the weather is good enough – there’s just the Laureate malting spring barley to combine,” he says.

Mr Beachell expects yields of 6.2t/ha – somewhat down on the usual 7.5t/ha, but is confident it will make malting specification.

He finished 180ha of winter wheat in August, growing Kerrin and Gleam as first wheats and Skyfall as a second.

Skyfall was  more challenged by drilling conditions, yielding 7.5t/ha. All wheat was in at 15-16% moisture.

Mr Beachell has also combined 45ha of Craft winter barley and 45ha of oilseed rape. “The Craft yielded 7.7t/ha at 14% moisture – quality was very good, all going for malting with 1.55% nitrogen,” he says.

In the South, Stephen Whitby is wrapping up harvest at Rowley Farm, Salisbury, with variable soil types greatly influencing crops.

Zyatt and Skyfall winter wheat yielded between 6t and 9t/ha, with lower yields from droughted soils.

“Quality has been reasonable with specific weights at 78-79kg/hl – slightly below the 80s we produce in a better year but still very acceptable,” he says.

Hagbergs are good at more than 300, and given low moisture contents of 12-14% he sold a large bulk straight off the combine.

However, Mr Whitby is disappointed with his winter barley, which was drilled in difficult conditions. “The six-row Bazooka only managed 5t/ha at 12% moisture.”

From 40.5ha of spring linseed, Mr Whitby has 12ha left to combine. “Linseed has been extremely disappointing this year – it was late drilled and then caught out by the drought, yielding about 0.2t/ha.”

The 44.5ha of Mascani winter oats were hit by the drought so yields disappointed at 4.9t/ha – but they made the milling grade with specific weights of 52kg/hl.

The 243ha of Graham, Costello, Extase and Diago winter wheat – and 12ha of spring wheat – were more pleasing.

“Together, winter and spring wheat averaged 7.9t/ha at 79kg/hl – all dried and over the weighbridge,” says Mr Doidge.

“Costello was highest yielding at 9.6t/ha at 80kg/hl; we were pleased with that.”