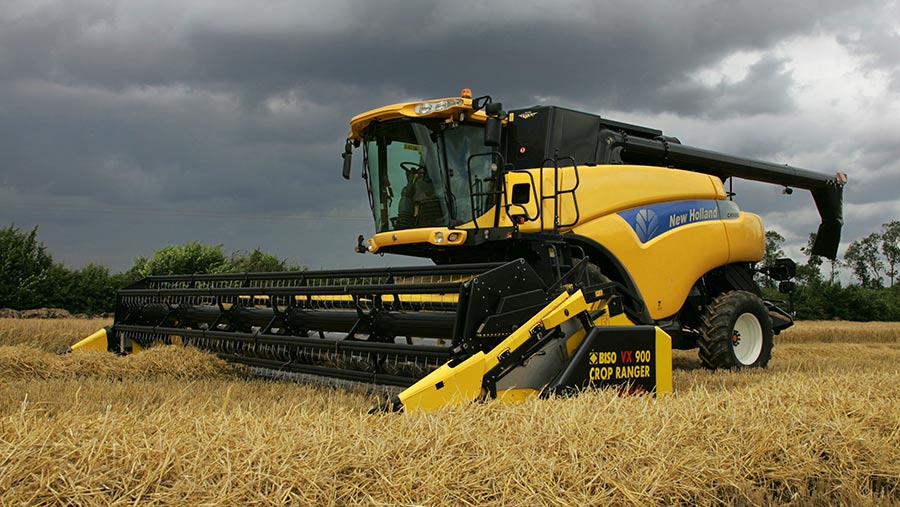 August’s unsettled weather with gales and storms is proving to be very costly to many growers as they struggle to get crops harvested in an already challenging season.

Fears are growing that harvest 2020 will drag on for many more weeks with crops still to ripen and wet weather.

Agronomist David Vine highlights the situation in the West Midlands with many still to start, or 20% cut with lots of crops still being sprayed off.

Everything is having to be dried too, he adds.

Here in the West Midlands most farmers either not started or about 20% cut lots of crops still being sprayed off so don’t get too disheartened we have been in a terrible weather cycle since it all went wrong last September.
Yields are also shite and everything needs drying.

Further south in Hampshire, David Miller sums up what is faced by many growers, with one field of Planet spring barley finally being cut after five attempts and with another 180ha still to cut.

Similarly, Roger Wilson who farms in north Wiltshire has much still to cut and wonders if they will be harvesting more in September than in the previous two months.

One crop that has suffered in the August gales is oats, with many reports of shedding and Buckinghamshire farmer Steven Lear questioning cutting oats for the straw rather than the grain.

Looks like we will be cutting our oats for the straw rather than the grain this year. I'm glad we whole cropped as much as we did now. 2020 can do one. pic.twitter.com/rEDtRG3W4R

In south Lincolnshire, George Sly has seen heavy losses too.

Heartbreaking. However this field and every other will have new hedging on all south and west facing areas with new hedges and alder spaced at 2m. A 10 year project to take control of wind speeds for our nuts and fruit. The boundaries pay £2 back for every £1 in. #keepthechinup pic.twitter.com/0jDaYWfYZE

Even more heartbreaking is seeing it in your best field of oats, as experienced by organic grower Mark Lea in Shropshire.

Last night I saw some shocking tweets about oats lost to the gales. Today we went into our best oat field and found this – absolutely sickening! pic.twitter.com/PpBV4u6KGA

The lack of harvest progress is having a knock-on effect for following crops, especially in Scotland where the window is much shorter.

David Fuller, at McGregor farms in the Scottish Borders, is drilling Aurelia oilseed rape and highlights the need for a settled spell to get ground cleared for OSR.

Sowing ⁦@LGSeedsUK⁩ Aurelia ⁦@McGregorFarms⁩ ⁦@UnitedOilseeds⁩. In need of some #harvest20 🌞 to get combines rolling and clear ground for oilseed rape establishment. pic.twitter.com/S4N3VZ0NQ7

The one positive is that the moisture has helped farmers to rapidly establish oilseed rape with the hope that will fight off the expected cabbage stem flea beetle attacks.

So far, there are no sign of beetles in Adam Driver’s crop in Suffolk.

Spraying volunteers out of OSR. No sign of beetles so far pic.twitter.com/qfxvAhi63q