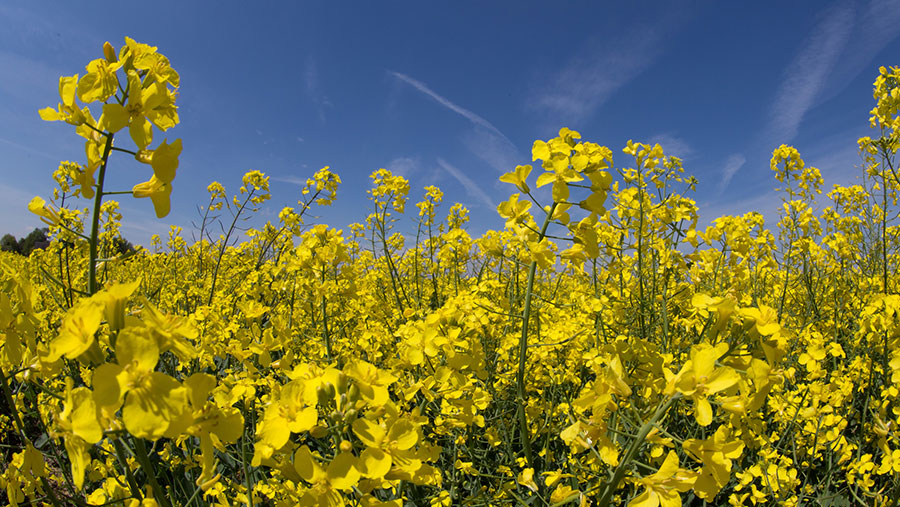 Spring oilseed rape has turned a healthy profit in a difficult season for one Oxfordshire husband-and-wife team..

Nigel and Margaret Lawrence grew 70ha of the crop this year and plan the same area in 2018 despite an extremely tough season with poor conditions for establishment and harvest.

In the farm’s overall harvest beset by delays, with just 98 combine hours taking 48 days to accomplish, the crop battled through to yield an average of 2.2t/ha, with the combine yield monitor peaking at 3.2t/ha.

Although a winter oilseed rape grower might be critical of that low yield, the Lawrence’s were able to slash variable costs back to just £190/ha meaning the crop turned a healthy profit.

But with a margin over variable costs of £492/ha, based on a rapeseed price of £310/t, Mr Lawrence says the crop can rival winter rapeseed gross margins even in a difficult season.

A bone-dry spring with no discernible rain for four weeks before and five weeks after the 5 April drilling date saw the crop fail to emerge until well into May on the Lawrence’s Shirburn Farm, near Wattlington.

Then persistent rain meant the rapeseed harvest was not able to be finished until 18 September, some two weeks after it should have been cut, leading to plant regrowth in the tramlines.

This meant the combine had to go through with a high header and just take the pods off to avoid green material blocking the machine.

They originally opted for the niche crop three years ago as part of a wider switch to spring cropping to have more cleaning crops for blackgrass control and reduce the impact of pigeons and deer which threaten winter-sown crops in the heavily wooded area.

The Lawrence’s say constant vigilance is still required after planting, with the brassica flea beetle an issue at emergence, and then the pollen beetle between green bud and petal fall.

A lower threat this season saw two applications of Hallmark (lambda-cyhalothrin) in May, then one application of Maverick (tau-fluvalinate) for pollen beetle in June, compared with a number of applications last year.

Having learned more about growing the crop in a challenging year this season they say they will wait next year until there is sufficient seed-bed moisture before drilling even if that means postponing drilling until May.

They also plan to desiccate the crop ahead of harvesting to prevent tramline regrowth and allow easier harvesting.