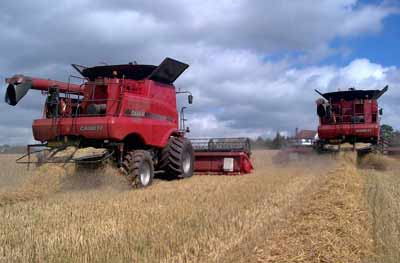 Heavy rain in the north and west has continued to wreak havoc with combining and over half the wheat area is still to be cut in some regions. But growers had managed to establish oilseed rape on cleared ground or by re-jigging rotations.

A week of dry weather could put these regions back on track, but an unsettled forecast means the struggle is likely to continue.

Harvest had been “miserable” for over three weeks in the Cumbria area, said independent agronomist Eric Woolley. “And they had heavy rain all last week.”

Although winter barley and oilseed rape were almost finished, only a third of spring barley and winter wheat had been cut, he said. “Quality is still okay at the moment, but sprouting risk will increase if we get another wet week.”

But despite the delays most had managed to establish oilseed rape. “Most growers cleared oilseed rape ground first and have got it in; they are much further ahead of last year.”

Wet straw was a consequence of the catchy conditions, but he remained optimistic for cereal establishment. “A week to 10 days of dry weather would sort out harvest and there is still time for cereal drilling.”

Feed wheats already cut averaged 7.5-8.5t/ha and growers aimed to cut at around 17% moisture, he said. “Some crops have been cleared at over 20% but most have been lower.”

Northumberland had also been very catchy, he added. “They have still got spring rape and roughly half the wheat to cut.”

Independent agronomist Patrick Stevenson said harvest had been pretty good east of the A1 in North Yorkshire, with 60-70% wheat already cut and beans waiting to be tackled. Wheat was coming in between 15-20% moisture and drying was not as difficult as last year, he noted.

Milling wheat yields were high, which diluted protein in some crops – “12% on average”, but Hagbergs were good at 220- 230kg/hl. Spring barley yields were up 10-15% on last year with good bushel weights.

But the area was on a “knife edge,” he added. “West of the A1 is a different story – only 40% of wheat has been cut and virtually nothing below 20% moisture.”

So far the weather had not affected quality, he said. “But another week of wet weather could see some issues develop.”

However, the delays had already affected next year’s cropping. “We have had to rejig rotations, either removing oilseed rape or moving it to cleared ground.”


Combined with last autumn’s troubled OSR establishment it meant there would be fewer first wheats, he said. “There will be more second and third wheats and greater risk of take-all.”

If a high pressure system came through it could change things for the north-west, he said. “Seven to 10 days of dry weather should see most of the harvest come in.”

Shropshire was similar to the north-west and rain had “stopped play,” said Stuart Dolphin of Wrekin Grain.

Last week was also very catchy and little progress was made, he added. “Some wheat was cut at the weekend, but came in at 21% moisture.”

Some winter rape had only just been cut and a few growers were still waiting to cut winter oats. However, for some straw was still green, he noted.

But despite harvest delays most growers had managed to establish oilseed rape, he added.