Sometimes things come along that change your life.

They make you wonder how on earth you managed before. They transform everything.

These are the great innovations – and, in association with EB Equipment, we want to discover what The Greatest Farming Innovation has been in the past 75 years. We’ve outlined six possibilities below – but we’d like to know what you think…


Of all the thousands of mechanisation developments during the last 75 years, the one that made the biggest impact on farming efficiency is the Ferguson System.

The first commercial version of Harry Ferguson’s hydraulically operated three-point hitch arrived in 1936 and now, after 73 years and the addition of a few mainly electronic refinements, it remains the standard implement attachment and control system on almost all production tractors in the world.

Its introduction was a huge step forwards, allowing the tractor and implement to work as an integrated unit for the first time.

It provides more precise depth control for jobs such as ploughing, working in a restricted space is easier and it can significantly boost traction efficiency, particularly in difficult conditions where wheel-slip is a problem.

Operator convenience and safety were not priorities in the 1930s but the Ferguson System benefited both. Operating the hydraulic system is much easier than manually raising an implement out of work, and there are important safety benefits because the three-point linkage and the automatic draft control reduce the risk of a tractor rearing backwards while pulling an implement – previously a major cause of death and injury on farms.

Dogged by controversy and entangled in red tape, genetic modification has promised much yet delivered little for the UK farmer to date.

But proponents argue circumstances will soon conspire to see that the first splicing of DNA in 1973 was the single most important moment in agricultural history.

If the vision is accurate of a drought-stricken, oil-deprived future, where labour costs and penalties for pollution are high, then GM will become the most important weapon in farming’s arsenal.

We will need GM to boost yields through drought-resistant crops that repel insects and stave off disease. The extra food grown will, in turn, be the key to feeding a booming world population, forecast to hit 9bn by 2050.

And, as oil reserves run dry, we will look to the DNA engineers to relieve us of our dependency on fossil fuels, by designing plants that produce plastics and use less artificial fertiliser to grow.

It seems a world apart but, outside the UK, the GM revolution is already under way. Across the world, 2008 saw modified crops grown on 130m hectares by 13m farmers in 25 countries, making it a record year for the uptake of biotechnology.

So GM has already come a long way, but it is the future that will prove its worth.

I’m not having any arguments – the greatest innovation for farming in the past 75 years has been the mobile phone.

OK, so there are days when carrying one seems a right pain. There used to be jobs where you could enjoy the peace and quiet. Now you are always contactable.

But it is all too easy to complain. And, if we’re honest, the availability and affordability of mobiles has revolutionised the way that UK farmers operate.

Jobs are completed far more efficiently because people can be in the right place at the right time with the right equipment.

Breakdowns are still a headache, but at least you can order the part within minutes of a problem occurring. And no longer are you forced to do your “trading” at either end of the day, with the added frustration of missing vital calls. You can sit on your tractor and do your buying and selling at a time that suits you and your bank balance.

They have an important safety dimension, vital in an industry like ours where people often work single-handed, they help offset the sense of isolation sometimes felt as a result of long days working alone – not to mention ensuring farmers get their lunch delivered to them during harvest. Still not convinced? Well, try leaving yours at home tomorrow and see how you get on…

Without the semi-dwarf genes, originally bred into a Japanese wheat, Norin 10, in 1935, the green revolution that enabled the world to feed itself post-World War II wouldn’t have happened.

An American wheat breeder, Orville Vogel, crossed Norin 10 with other wheat varieties to shorten wheat from 4ft tall to just 2ft. It allowed growers to use more fertiliser to increase yields without the crop becoming too top-heavy and falling over. Vogel shared his research with another breeder, Norman Borlaug in Mexico, who led the introduction of semi-dwarf wheats in that country and India and Pakistan. It led to a doubling of yields, greatly increasing food security. Borlaug is credited with saving a billion people from starvation.

While semi-dwarf varieties were more of an evolution in the UK than a revolution, they have also transformed wheat growing here.

The first UK semi-dwarf varieties were Hobbit, Bilbo and Durin, bred by Francis Lupton of the Plant Breeding Institute in the early 1970s.

While other agronomic advances, such as tramlines and fungicides, have contributed, they were the catalyst for a doubling of average UK wheat yields from 4t/ha to over  8t/ha currently.

Progressive farmers compare performances against benchmarks, computer programs enable what-if comparisons to be calculated at the press of a key, and all are familiar, in these volatile times, with the concept that fixed costs can be more variable than variable ones.

But all these efficiency aids are based on gross margins; the simple expedient of splitting the costs and returns of any farming activity between those that can be predicted, like rent and labour, and those that are subject to change according to costs, yields and market demand.

Prior to the introduction of gross margins by a few inspired MAFF advisers in the 1960s, farm costings were either detailed analyses that attempted to allocate every cost and return, or crude calculations on the back of a fag packet. Needless to say few of the former occurred and, while there were more fag packets around then than now, most farm production was based on faith and guaranteed prices.

As those guarantees disappeared and profitability was no longer assured, gross margins enabled farmers with few accountancy skills to work out the likely viability of any enterprise they fancied. They were therefore the most important innovation of the last 75 years.

There are many who would say livestock farming and technological innovation aren’t happy bedfellows, but a glance back through the last 75 years highlights just what advances have been made in that time. 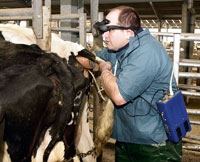 After all, had you told the average farmer in 1934 that within his or her lifetime most dairy cows would never see a bull, but would be served by artificial insemination, they’d have thought you were slightly insane.

But AI had a massive impact on UK dairy farming, allowing exceptional genetics to become available to every farmer. And many beef farmers are also benefiting from AI, too.

Perhaps as remarkable is robotic milking. In many 1930s herds, milking was still being undertaken by hand – but by 2009 robotic milking, while not being commonplace, is a technology an increasing number of farmers are opting for and benefiting from its management advances.

The sheep industry has also seen big technological advances, with the identification of disease resistance and increased milk yield through genetic markers one of the key breakthroughs. Being able to breed stock with inbuilt resistance to diseases, such as footrot, could save the industry substantial amounts of money.


Other possible contenders for the Greatest Farming Innovation 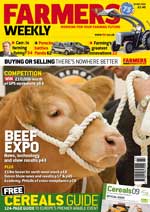 Do you agree or disagree with our suggestions for what should win the accolade The Great Farming Innovation – or, better still, do you have additional ideas of your own? Tell us what you (ideally giving us a few words explaining your choice). Post your suggestions on our website forums or email to tell us at fwfarmlife@rbi.co.uk.

As well as The Greatest Farming Innovation, we’ll be looking for your suggestions in five other categories in this series.

With your help, we’ll be establishing what is The Greatest Farming Figure, Machine, Decade, View and Cock-up.

Keep an eye on the magazine and the website over coming weeks to see how you can get involved. We’ll be drawing up a shortlist from all the suggestions and then giving you the chance to vote.

>>More on The Greatest… series>>