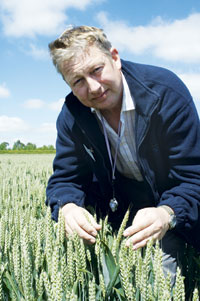 Seven sites were sampled before fungicide treatment in April, with testing for triazole resistance carried out by French research institute, INRA.

Septoria levels were low, but 38% of the spores at a midlands site were found to be the ‘triHR’ strain found last year in Lincolnshire and in France. “That’s as high a level as was found in France last season.”

It was still debatable whether a lab resistance test result would be mirrored by poorer control in the field, he acknowledged, although where levels of resistance of the magnitude were recorded in France, full doses of triazole fungicides had only provided 50-60% control compared with 90-100% usually seen, he said.

Field trials were under way at the midlands site this season to investigate whether similar field performance concerns could be found in the UK, but he wasn’t expecting to find any. “It is not a high disease year because of the weather.”

The finding didn’t mean any radical changes in programmes for next season, however, he said. “We’ve always advocated the use of mixtures [of actives including triazoles], and that should continue. There is no resistance to chlorothalonil, and from next season we should have the SDHI (carboxamide) fungicides that should dampen the spirits of septoria, at least until it learns how to get round them.”