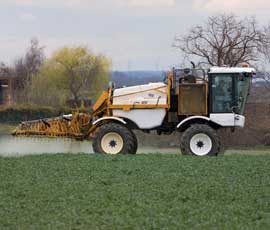 Combined sulphur and nitrogen fertiliser applications in oilseed rape may need to be delayed to prevent forward crops putting on too much biomass too early this spring.

Nitrogen timing should drive fertiliser applications for most growers, says Mike Warner, chairman of the Association of Independent Crop Consultants.

“Anything with a green area index of two or more doesn’t want too much nitrogen applied too early. Forward crops will need their growth restrained, so nitrogen might need applying 10-14 days later than they would normally get it.”

Delayed applications are leaving some growers nervous about not applying sulphur early enough, but ADAS’s Pete Berry says Rothamsted Research from about 10 years ago showed in slight or moderate deficiency situations, sulphur could be successfully applied as late as early April.

“The perception is you need to go on dead early with sulphur, but this study suggests you might not.”

Patrick Stephenson, an independent agronomist from North Yorkshire, believes it would be best to apply sulphur by mid-March at the latest, if possible.

“It has to be converted in time for the rapid growth in April.”

Some growers had the “foresight or good fortune” to purchase various pelleted forms of sulphur in the autumn, which will give them more flexibility to apply sulphur earlier without also applying nitrogen, he says.

“If you have that option, apply it as soon as possible,” he advises.

Many other growers will be using a combined nitrogen/sulphur product, such as Double Top, he says. “That provides a large amount of sulphur without too much nitrogen. For example, 125kg/ha of Double Top applies only 30kg/ha of nitrogen, so growers could use that early and then manipulate the later timing.

“Last year’s dry spring showed that late take-up of nitrogen by oilseed rape didn’t affect yields in the same way that lack of nitrogen does with wheat or barley.”

Even so, Mr Berry still recommends delaying its application until mid-March on the forward crops. “It is not a year for February nitrogen – and then apply the least amount of N you can with the right amount of sulphur, and manipulate the main dressing after that.”