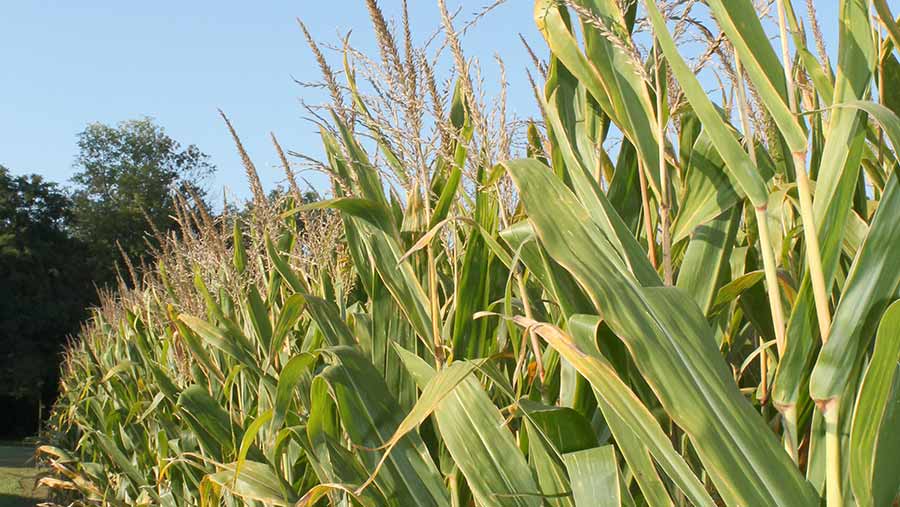 US farmer Douglas Harford has more than doubled the organic matter content of his soil over his farming lifetime, and his son Chris plans to increase it still further to drive up productivity.

“We get hung up on fertiliser usage, but we’re talking about a really small amount of the crop – a plant is mostly made of carbon,” he explains. “Sequestering carbon is good for us as farmers, as all of the plants’ needs come out of the earth.”

It wasn’t always this way. “When this land was first farmed 150 years ago it had 11% organic matter,” says Mr Harford.

“About 100 years ago we started ploughing it and released the carbon, which reduced the cation exchange capacity and flushed the nutrients out of the soil. We had good crops for 50 years, but we were mining the soils to get them.”

Mr Harford has farmed at Mazon, Illinois, since 1972 – at that time the organic matter in the soil had dropped to 3.5%. “We needed to use fertiliser to grow the crops, but the sustainability of that was difficult. If you didn’t put fertiliser on your yields went down; if you did use fertiliser you had no money.”

In 1983 he became one of the first farmers to adopt no-till practices, and the 600ha farm has been 100% min-till ever since. But since then more than half of farms in Illinois have become no-till.

“We’ve done extensive soil testing throughout, with grid sampling since 1976,” he explains.

“Our organic matter content is now averaging 7.7%, and many times we will get readings of 8-9%.” 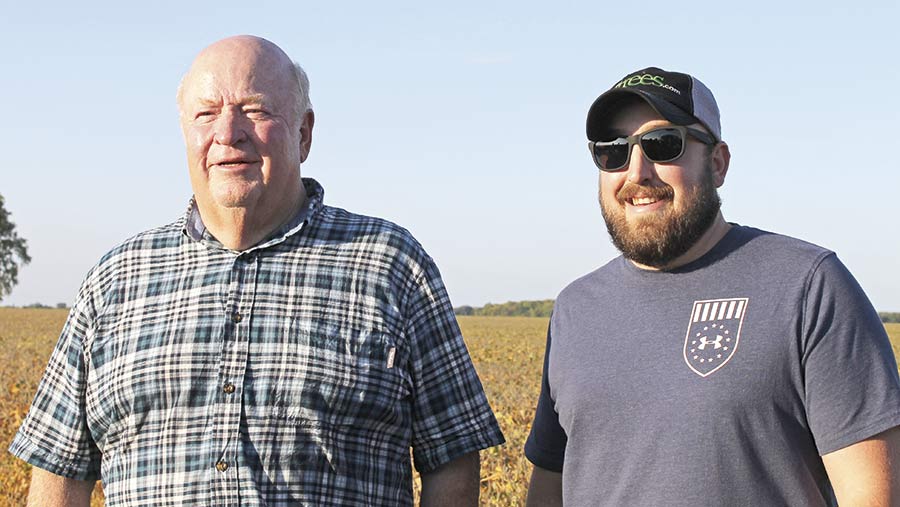 It hasn’t always been easy though. “It does take more management, dealing with the residue on the surface. Tillage makes the soil more even, without lumps of residue, and it dries the soil out – without tillage you have to wait for it to dry,” says Mr Harford.

“It’s more difficult to get crops established in the spring because underneath the residue the soil is cold. And tillage kills a lot of weeds – we’ve had to figure out a way to do that without tillage.”

But with 34 years of experience behind him, this farmer has figured out how do it right. Growing a 50:50 rotation of soya and maize, he now uses strip tillage to clear the crop residue in the autumn, allowing the soil to dry and warm up in the spring ahead of planting maize back into the same strip using GPS autosteer.

“Soya is much more forgiving, so we just plant it straight into the corn residue,” he says.

As a legume, soya fixes nitrogen into the soil, leaving a 50kg/ha credit for the following maize crop.

He then adds 179-185kg/ha of nitrogen fertiliser on top of that, with about 224kg/ha of phosphate and potash as a maintenance rate, which he says will last him for two years in a soya-maize rotation.

Tim Bardole farms with his father Roy and son Schyler in Rippey, Iowa, where they have been min-till since 1993. They use a similar system to Douglas Harford, strip-tilling maize and no-tilling soyabeans.

“We apply anhydrous nitrogen and dry phosphate and potash to the strip in the fall, so it’s ready when you drill the corn in the spring, with less labour demand at a busy time of year,” says Mr Bardole.

“With GPS autosteer you can plant right in the middle of the strip so all the fertiliser the crop needs is exactly where you plant it.”

Even though strip tilling is more expensive than min-till, it’s significantly cheaper than conventional tillage.

He uses less than less than 113 litres/ha of fuel over one season and estimates it would be twice that with tillage.

“We’ve also got fewer repairs and maintenance, and less labour – we wouldn’t have enough workers to do conventional tillage now.”

Organic matter is proven to increase the cation exchange capacity of soil, which makes a greater proportion of nutrients in the soil available to benefit the crop.

“Our soil is high in phosphate but in a non-available form. I believe we’re seeing more becoming available as the bacteria are extracting it – our phosphate levels are coming up.”

When grain prices are good he tries to build the soil fertility, and when they are poor he cuts back, safe in the knowledge that there is enough goodness in the soil to carry him through the lean years.

“We’ve also noticed a real change in the soil since we started no-tilling. We thought we’d have to till the soil every few years to get rid of compaction, but we’ve been pleasantly surprised,” he explains. 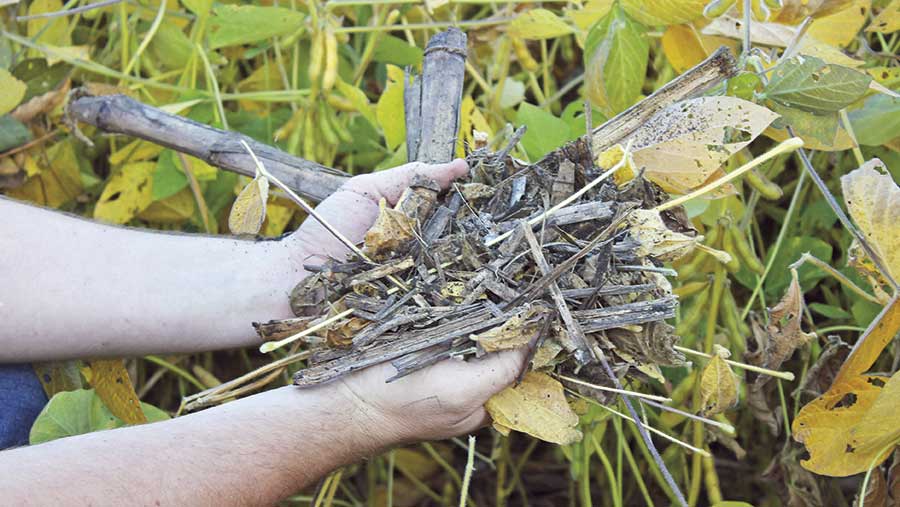 “The structure is so much better, and it supports the weight better, so compaction isn’t a problem at all.”

“If you have poorly drained soil no-till won’t work well. It’s vital to maintain the drainage every year – it’s a great investment. With farming you have to know what you can manage and what you can’t – I can’t manage the soil type but I can manage its organic matter and drainage.”

Another benefit of higher organic matter is the water holding capacity of the soil.

That equates to 82mm/ha, giving him an extra three days water supply between rains, he explains.

“We used to be beholden to the sprayer as you could only spray at certain times and growth stages. Roundup (glyphosate) kills the weeds whenever we need it, and it doesn’t last in the soil like other products we used to use,” he says. “I’m using a lot less chemicals than I ever did before.”

Although no-till presents initial challenges over weed control, the longer the soil is left undisturbed the easier it becomes, and they have further reduced chemical usage after getting rid of the weeds that were spread by tillage.

The only insecticide used on the farm is in seed treatments, with fungicides applied to both soya and maize.

“They are expensive, but we get consistent benefits in the soya. We have to apply fungicides to the maize by plane, and you’ll get one year when it doesn’t pay, but another year when it pays heavily.”

“We can’t do continuous soya as disease builds up, so we’ll rotate one field at a time to three years of maize,” explains Mr Harford. However, maize nematodes and diplodia ear rot can also be a problem, so occasionally the rotation needs to go the other way.

He sees a significant yield bump after three years of maize – but on average he achieves 13-14.4t/ha of maize and 4t/ha with soya.

Rootworm beetles used to be a huge problem, but GM crops have answered that challenge. “Also, the no-till residue keeps the soil cool, which delays the development of the larvae.”

At harvest, Mr Harford leaves the soya stems quite long, to reduce the amount of residue on the soil.

“We usually harvest the soya dry and sell it forward to move in the fall. But we store about half of the maize to give it more time to dry slowly and cheaply.”

The adoption of precision farming techniques has made it easy to quantify the benefit of different management approaches, and Mr Harford has made significant cost savings through adopting min-till.

“We run smaller equipment, use less fuel and have fewer inputs, while our yields are roughly the same,” he explains.