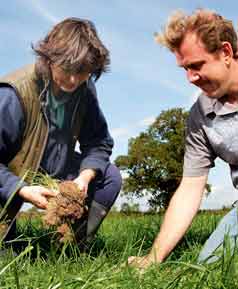 Heavy clay soils may not appear conducive to extensive grazing, but Somerset dairy farmer Chris Barnes has proved with broad thinking and a drive to succeed, soils do not have to be a limiting factor.

To maximise efficiency from soils, farmers should be looking to harness what is already present in the soil, says independent consultant, Josephine Scamell.

When fields are not performing, conventional NPK analysis may not highlight the root of the problem. “Basic analysis may show specific nutrient levels are adequate, however, they do not necessarily demonstrate nutrient availability.”

“For example, total phosphorous levels may appear to be high on analysis, but actual availability may be poor.” When pH or key nutrients are out of balance, essential substances may be ‘locked up’ in the soil, so nutrients are not actually useable by the plant.

And this was the case at Rhodes Farm. “The heavy clay soil on this farm was ‘claggy’ and anaerobic with poor microbial activity – a pattern often seen on heavy ground.

And although potash levels were satisfactory, the potash sodium balance was incorrect. “Sodium was low, resulting in poor forage use by cows. By correcting this balance, nutrient utilisation by forage would improve, potentially allowing a reduction in nutrient fertiliser inputs.”

The first step was to raise calcium levels without shifting soil pH. “By applying calcium sulphate in the form of gypsum, we not only tackled calcium levels, but also addressed high magnesium.” Sulphate is attracted to magnesium to form magnesium sulphate or Epsom salts. This is readily drained out of the soil, removing magnesium and leaving calcium behind.


“The calcium ‘fluffs up’ the soil so there is more ‘pore space’ and added crumb structure. This improves soil drainage and water holding capacity, while providing more air pockets for aerobic microbial function.”

Sylvinite was also applied to address the potash:sodium balance alongside salt application and slit aeration.

Since implementing these changes, there have been marked improvements to soil structure and grass production.

“Before these changes, soils were so compact roots were unable to grow down and we were prone to suffering from drought, says Mr Barnes.

“Previously grass roots were thin and brittle. Now roots go down to a depth of six inches and are covered in numerous lateral root hairs giving a ‘fluffy’ appearance.

“There is more grass of greater palatability and this has been reflected in better production from grass and higher milk proteins.”

And soil improvements have played a key role in improving herd health, says Mr Barnes. “We were seeing 40 cases of mastitis per 100 cows. Following changes we are now seeing 12 cases per 100 cows.”

And consequently vet and medical costs have dropped significantly. “We are now spending £25 a cow a year on vet fees and have reduced vet and medicine costs by £2000/year.

“Other management factors do come into play, but I strongly believe if cows are healthy and resilient, they will be less prone to mastitis – and soils have played a key part in this.”

“If you haven’t got healthy soils, forage quality is poor and subsequently animal health is compromised.”

By adopting an “all encompassing” approach, following through from soil to forage to the cow, there is no doubt cow health has improved, agrees vet Anthony Wilkinson of Friars Moor Vets.

“Condition and cow health is excellent. The fact the herd is in the top 5% for herds of this size for somatic cell counts and culling rate is low, also speaks volumes as to Chris’s forward thinking, positive attitude.”

And for Mr Barnes, soil improvements have proved so successful he has invested in comprehensive soil analysis for every field. “This is costly, but in my mind, it is well worth the investment – because soils are working more efficiently we have been able to reduce the amount of P and K applied.”

But, often it is not necessary to sample every field, says Mrs Scamell. “When a field is underperforming and it is difficult to see why, a comprehensive soil analysis is recommendable.”