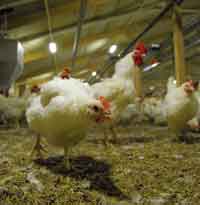 The failure by EU ministers to address the GM crisis at the EU Farm Council earlier this week drew heavy criticism from two speakers at the Northern Ireland Poultry Industry Conference.

She said member states must stop blocking GMs to offer a lifeline to poultry producers who face high prices for non-GM feed.

At the conference, Owen Brennan, managing director of Devenish Nutrition, Belfast, welcomed the UK government’s support for calls to overhaul the GM rules, but criticised the Irish Government’s stand.

“Yesterday the GM proposal was supported by the UK, but Ireland has abstained on every GM vote.

“How can this be the case with an economy that has a high dependency on farming? The food industry in Ireland is one of the few sectors with potential for growth. But without soya, it is not viable.

“Why is [Brendan Smith, Irish Minister of Agriculture] refusing to support proposals on GM approval? How does Smith justify his standing?”

One problem highlighted by David Green, consultant for the American Soybean Association is the EU’s zero tolerance rule where even traces of unauthorised GM means the rejection of the whole shipment.

“We have, over recent months, seen six shipments of maize and soya turned away from the EU having tested positive for GM varieties not yet approved by the EU”.

The most recent case concerned a ship still held in a German port containing just dust traces, which didn’t even register as 0.1%.

“One trader recently said you can find it anywhere if you look hard enough. Even with iron ore you will find GM dust from previous shipments. It’s commodity shipping,” said Mr Green.

He suggested that this risk of being turned away could lead to shippers halting shipments of non-GM soya to the EU.

One solution is to raise the tolerance to 0.1% or higher, but the EU commission is paralysed due to the anti-GM stance of countries like Austria, Hungary and Greece.

The consequences of failing to address this are great. As Mr Brennan pointed out, back in 2007 Northern Ireland saw maize products disappear overnight due to the Herculex maize case.

“We effectively lost 15% of feed tonnage overnight. We did manage to solve this, but it came at a £50m cost to the Northern Ireland industry. But the difference this time [with soya] is that there is no viable alternative.”