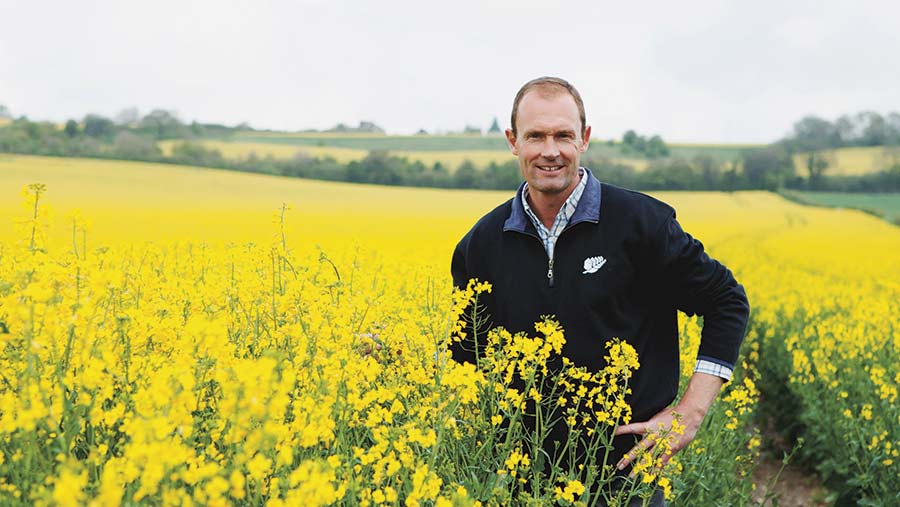 Companion crops have allowed Kent grower Andy Barr to stop using insecticides on his oilseed rape despite being in a hot spot for cabbage stem flea beetle damage and without seeing a drop in yields.

The secret to his success does not lie with companion cropping alone, but rather having a complex, integrated set of biological systems at work on his farm.

Mr Barr moved to companion cropping six years ago and the main bulk of his rapeseed now achieves a yield of more than 4.5t/ha, with just minimal use of pesticide slug control.

Beans have proven to be the most effective companion – increasing yields by 0.4t/ha and reducing stem beetle numbers in comparison with other combinations that he has tried.

The beans’ ability to grow fast and get above the rapeseed appears to help with flea beetle, while this year’s trial of a mixture of berseem and crimson clover, with lower growth, has been less successful.

When vetch was used both the rapeseed and the companion crop were attacked by the pest, he says.

What is conservation agriculture?

Conservation agriculture is based on three core principles which are carried out at the same time:

Mr Barr plans to return to beans next year, direct-drilling them at the same time as his oilseed rape using a Dale Eco-drill, with alternating tines to sow the beans.

But relying on companion crops alone as a control method is a recipe for failure, he warns.

“If you suddenly stopped spraying tomorrow without doing anything else you are probably going to have a lot of pest damage,” he says.

Mr Barr has been incrementally changing his farming system over the past 18 years to one which is increasingly based on conservative agriculture, starting with the move from ploughing to shallow-till.

He admits his current system is rather complex, but says this is the reason it works.

“That’s biological systems for you: you can’t have one without the other,” he says. “There is no simple answer. You have to embrace the complexity. Simple systems are much more prone to failure.”

An important element of his complex system is a longer rotation and a move away from mono-culture.

When oilseed rape yields started to drop off after initially increasing to 4t/ha, he blamed the rotation. Yields took off once more after he increased oilseed rape to one in five years.

He also grows the most disease-resistant varieties – farm-saving Elgar and buying in the Clearfield variety Imperial.

Mr Barr also focuses on ensuring there is a healthy ecosystem to support beneficial insects. The farm has moved to more spring cropping and these are proceeded by a cover crop to ensure microbes in the soil are constantly fed.

“I started using cover crops in 2003, but nobody was really doing it at that time and I stopped after a few years. That was a mistake. It left the microbes to starve. Now I keep a cover crop as much as possible,” he says.

These cover crops are direct-drilled as soon as possible after harvest to give them a chance to capture as much summer sunshine as possible.

These crops are destroyed early to ensure nitrogen is available for the following crop or are grazed with sheep.

He also specially designs the field margins around his oilseed rape to encourage beneficial insects by including a brassica in the mix.

Protecting these insects was also behind his move seven years ago away from metaldehyde for slug control to ferric phosphate, despite being three times as expensive at the time.

“I switched when I saw a carob beetle walking off with a metaldehyde pellet. The more beetles we have the more they eat slugs,” he says.

Molluscicides are the one pesticide that Mr Barr has not been able to completely eliminate from his no-tillage system.

“It’s not an issue that should just be brushed over. When we moved to a direct drilling system we did have more slugs to begin with and I was spending way too much on slug pellets,” he says.

“Cultivation kills slug eggs, but it kills a lot of other things too. You have got to try and find another way.”

One way is to use a drill with a roller to firm the soil, but he has also had success with more alternative methods, such as leaving volunteer oilseed rape and beans in winter wheat crops.

Mr Barr is a firm believer that spraying for pests is a vicious cycle – the more you spray the more you will need to spray, as beneficial insects will be killed off at the same time.

He acknowledges that for both grower and agronomist it takes a lot of confidence to stop spraying and hope for the best, especially as the current system of single-plot trials are not designed for biological systems.

While there is a huge amount of scientific research in the area, most of which is not fed through to growers, cutting back on insecticides is still a process of trial and error.

“I have a friend doing a similar thing. He didn’t get his autumn insecticide on and thought he would be OK. He wasn’t,” says Mr Barr.

Moving forward, his focus is on trying to establish a clover cover crop and keep it growing as a permanent under-crop.