Light leaf spot is spreading west with the disease being diagnosed in oilseed rape crops in west Wales, Shropshire, Leicestershire and Wiltshire after the analysis of plant leaves in the laboratory.

The crop most yield-sapping disease has now been identified in 13 sites in England, Wales and Scotland, although few visible symptoms are being seen in the field.

These sites include three in Berwickshire, three in Lincolnshire and then one each in Aberdeenshire, Norfolk, Essex, Shropshire, Wiltshire, Leicestershire and Ceredigion.

The sites are  part of a free disease-diagnosis project, called SpotCheck, being undertaken by crop consultants Adas and funded by agrochemical and seed group Bayer. 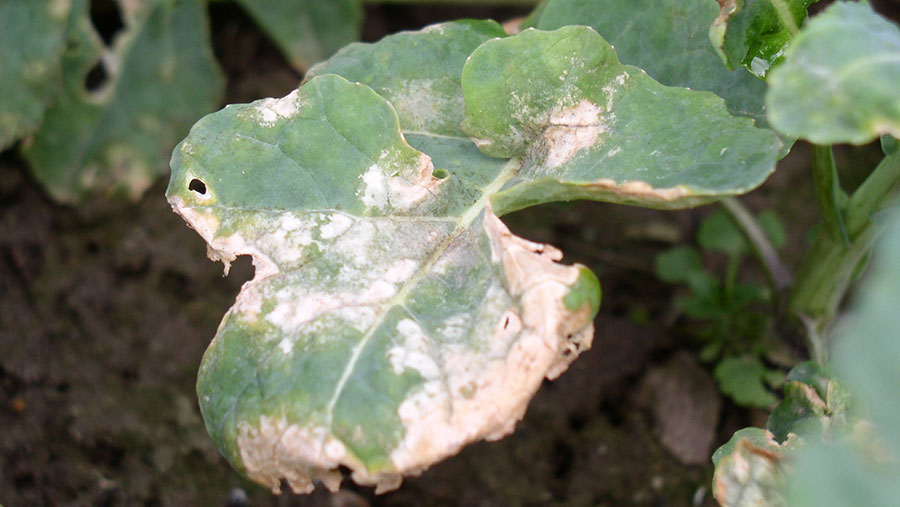 The scheme, which started at the beginning of October, has tested 140 samples, which have also shown plenty of visible phoma disease.

Philip Walker, plant pathologist at Adas has been incubating the oilseed rape leaf samples being sent in by growers and agronomists for two days and then looking for disease under the microscope.

He added the disease is being picked up in more westerly later-drilled crops after light leaf spot was first diagnosed in crop further east where they were often sown earlier to counter likely attacks from cabbage stem flea beetles.

The disease is being more with the onset of wetter weather, although sampled crops in Yorkshire and Northumberland have stayed clear of light leaf spot.

Growers are advised to use azole fungicides based on either prothioconazole or tebuconazole, or a mixture of the two to protect against light leaf spot.

Clear visible signs of phoma are being detected in crops from the Scottish Border down to Kent.

Growers can use the free  SpotCheck disease-sampling service – initiated and funded by Bayer, conducted by Adas and supported by the Association of Independent Crop Consultants – by contacting Adas at Rosemaund in Herefordshire (01432 820 444) for pre-paid envelopes and then sending in crop samples for diagnosis.

Growers are advised to pick 30 random leaves, as light leaf spot can develop first on newer leaves and phoma on older leaves. The samples should then be sent to Adas.