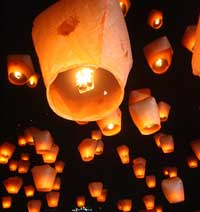 Concern is mounting over the dangers posed to livestock and property from Chinese lanterns lit in memory of missing people.

A growing trend has seen hundreds of lanterns released into the night sky over England during the past fortnight.

Some 40 lanterns were released to highlight the plight of missing cruise ship worker Rebecca Coriam, who has not been seen for almost two weeks.

More than 150 relatives and friends released 40 lanterns into the sky “to guide Rebecca home” at a vigil on Sunday (3 April).

The lantern release followed a similar vigil at Swindon’s Polo Ground in memory of 22-year-old Sian O’Callaghan on 26 March.

Some 10,000 people attended the Swindon vigil. Many released Chinese lanterns and balloons with messages of condolence.

While the vigils have drawn attention to tragic events, farmers have long warned of the dangers posed by Chinese lanterns to livestock, standing crops and thatched properties.

The lanterns are generally made from paper supported by a wire frame that incorporates a holder at the bottom for a solid fuel cell.

Wiltshire & Swindon Fire Authority said the risk of fire caused by Chinese lanterns should be fully considered prior to use.

While lighting and launch were largely in the control of the user, the actual flight path and ultimate destination were generally not.

There was also no guarantee that the fuel cell would be fully extinguished and cooled when the lantern eventually descends.

“Any subsequent contact with a combustible surface could result in a fire developing,” said the authority.

The Women’s Food & Farming Union has called for the lanterns to be banned.

“The lightweight metal structures are hazardous to cattle, sheep and horses, should they eat them,” it said.

“Not only that, the metal may lie dormant on the land and then gets into silage or hay at harvest time.

“This has its own added problems when it is fed as winter feed and cattle eat it as part of their forage.”