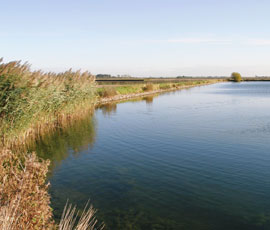 A move away from individual farm reservoirs to a more collective approach could help solve the water demands of farmers growing intensive crops in drought-hit regions, say experts.

Farmer and rural consultant Martin Collison said a “piecemeal approach” of building small reservoirs to satisfy the water supply for three, four or five farmers at a time was not sufficient.

Instead, he would like to see the UK follow the lead set by other countries, such as the USA, Greece, Italy and Spain, where large-scale reservoirs linked to a water distribution system serving more than 300 farmers at a time were common.

“In recent years, there has been more focus on collaborative reservoirs, which are useful to supply three, four or five farmers,” said Mr Collison.

“However, we need to recognise that there is a 30 to 40 year need for our water supply, particularly with the potential of climate change to guarantee the high value irrigated crops that the East of England needs to produce, such as salads, vegetables and potatoes to reach the supermarket shelves.

“Instead, we should be talking about creating reservoirs that serve more than 300 to 400 farmers at once.”

Mr Collison, who is based in Kings Lynn, Norfolk, said projects like the Great Fen Project, which is restoring 3,000ha of farmland situated between Huntingdon and Peterborough to fenland wildlife habitat, could include a component to build a large-scale reservoir.

“The area is on the edge of the River Nene which moves a lot of fresh water through the Fens and through Bedfordshire,” he said.

“A large-scale reservoir would need to cover thousands of acres, but it could supply water to east Lincolnshire, Lincolnshire, west Norfolk and the Fens where a lot of abstraction is concentrated.”

The size and scale of building such a reservoir would be dependent on how many farmers it would serve and the crops they were growing, he added.

In the future, he said coping with climate variation would not just be about abstracting more water from rivers. Farmers also needed better facilities to store water after abstracted as well as capture water from roofs.

The idea of transporting water from the wetter regions in the North and North West to parched southern and eastern regions could also be a workable solution, provided the country had the infrastructure to store it, said Mr Collison.

“Within the Fens, Anglian Water is already sending a lot of water to the Essex to meet the demands of the housing and industrial sector,” he said.

“In southern Italy and Spain, farmers are involved in irrigation and distribution districts which are joined up and supply water to dozens of farmers,” explained Dr Knox.

“There is a huge reservoir at the top of the catchment and a distribution network which is pressured, serving 200 to 300 farmers. They dip into the same reservoir and share the costs.”

But a shift to a collective model would require widespread changes to the water regulatory framework, he warned.

“There would need to be changes in the way water is stored and distributed,” said Dr Knox.

“At the moment, farmers are seen as individual entities and their water rates are linked to their farm. But a move to a more collective model would mean one licence for one group.

“That could lead to issues over water sharing and costs. For example, if a farmer decided to move out of irrigated cropping, the cost of that share may have to be met by those left behind.”

Prof Knox added: “There are valid reasons for taking to a more collective approach to water sharing, but it’s not going to happen overnight in this country.

“But if we start to experience more droughts and water scarcity, then options like this become more viable.”

But Essex farmer and Farmers Weekly columnist Guy Smith expressed reservations about a move to a continental-style system.

“British farmers are not exactly know for their ability to co-operate amongst each other. We tend to like ring fenced farms,” he said.

“Instead, wouldn’t it make more sense to increase individual capacity on individual farms?”

Mr Smith, who farms the driest land in Britain at St Osyth, added his voice to industry calls for a more flexible approach to water abstraction.

“My water abstraction cuts off on 31 March, but if flow levels are still above permitted levels on 1 April, I cannot see any reason why I shouldn’t be able to extend my abstraction.”