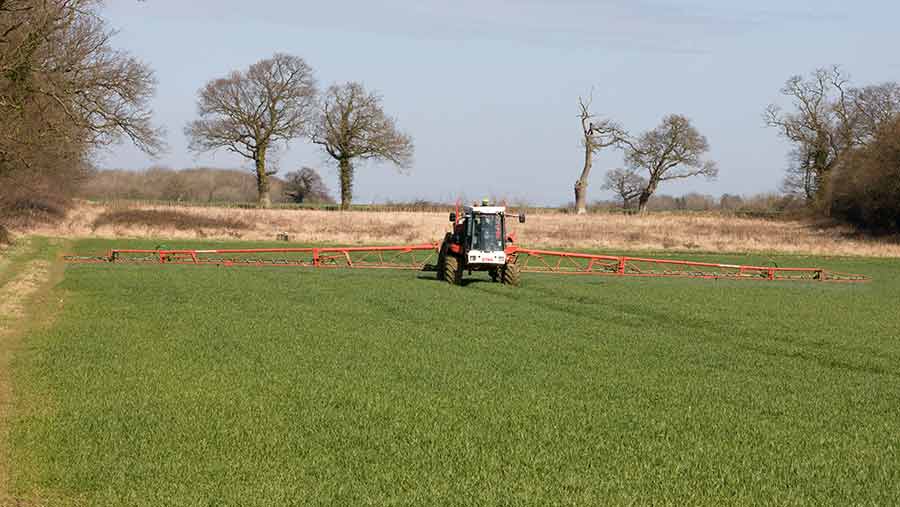 Taking out big grassweeds is set to be a priority this week, as soon as land is dry enough to travel on.

This week’s fine spell of weather is helping to dry out sodden land and many farmers are itching to get out with their herbicides.

That’s because weeds have benefited from the mild winter, as last autumn’s wet weather prevented many post-emergence applications from being made.

Ideally they will be applied alone, says Farmacy’s Ryan Hudson. “But where rust is an issue or workload dictates, Rubric [epoxiconazole] may be included in some cases.”

In the north, Yorkshire-based AICC agronomist David Martindale highlights that temperatures have remained too low for contact-acting herbicides such as Atlantis (iodosulfuron + mesosulfuron) to be applied.

“With time marching on, it will be a case of fingers crossed as to how well they control remaining blackgrass with more advanced canopies.”

Mr Hudson believes some growers have to be realistic about blackgrass populations and the disappointing level of control for these forward grassweeds.

“In some cases we have taken the view to sacrifice areas of fields. With commodity prices where they are, this is perhaps the year to do something different and try to get on top of the problem.”

In the West, wild oats are the challenge in earlier-drilled crops, as “they have grown very big this winter” according to Matford Arable’s Neil Potts.

Mr Potts adds: “They will require control sooner rather than later if they are not to compete with the crop.

“As ever with this weed, it is a numbers game as to how urgently it should be taken out. This has to be balanced against the risk of a further flush as we move into the spring.”

Read the full reports from our Crop Watch agronomists, who also tackle spud planting, spring drilling as well as give their thoughts on T0 fungicides.