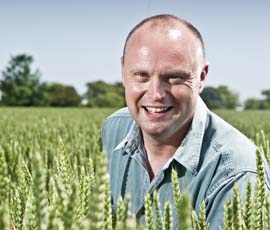 There is just over a week left to enter the second nabim/Crops Milling Wheat Challenge and win the coveted title.

He grew 960ha of the crop for last harvest, averaging 9.95t/ha on his heavy alluvial clays and all at full milling quality.

Solstice is his key variety, averaging 10.8t/ha with a top-quality 80kg/hl specific weight, 400 Hagberg and 13% plus protein specification. Battalion and Gallant also performed well, while two varieties with a great past still feature strongly.

Hereward has been at Deal Hall longer than Mr Ponder. This year it yielded a respectable 9.4t/ha. “It remains a mainstay variety due to its good standing ability and the additional premium that keeps it competitive.” Soissons remains a favourite due to its early harvest and earning power.

But producing plenty of good grain is only half the story – a good marketing strategy is vital. About half the crop is sold before harvest, often at fixed premiums. “It costs about £90/t to grow wheat, so if we can lock into a decent margin we will.”

The Milling Wheat Challenge, organised by Nabim and Crops magazine, is now in its second year and it aims to spread the recognition further.

“There’s so much that we in the milling industry can learn from growers like these,” says Nabim’s trade policy manager, Martin Savage. “We also believe it is a great way of spreading best practice to others.”

If you fit the bill, then a few minutes filling in the form online at www.fwi.co.uk/nabimchallenge could pay dividends.

Three finalists will be wined and dined at the Ritz Hotel in London and the winner will receive a trophy and all the kudos that goes with being the UK’s Milling Wheat Challenge champion. 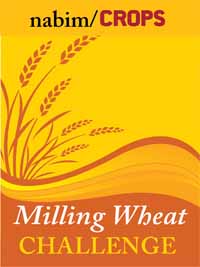 Download the online entry form. Full rules and information about the challenge can be found at the same web address and the deadline for entries is 6 May 2011.