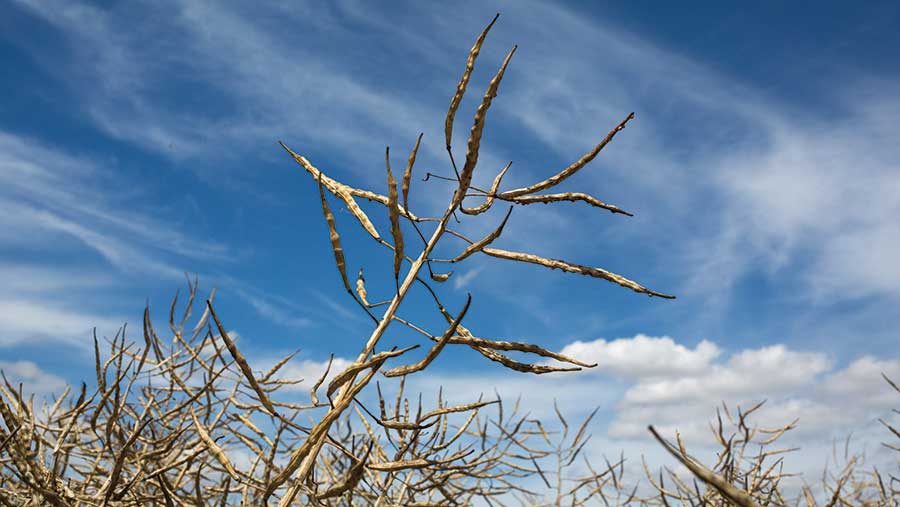 Oilseed rape yields fell well short of many growers’ expectations at harvest. We talk to ADAS’ head of crop physiology, Pete Berry, to find out what went wrong.

He says while the outcome was not so good, crops started off well.

See also: How to tackle light leaf spot in OSR this season

“Crops looked good at the beginning of the year – helped by a dry September and warm October. They established well and then put on some growth.”

Apart from some significant, but localised cabbage stem flea beetle damage, most of the oilseed rape crop was described as decent as it moved into winter, he recalls. The problems began in November and December – with the amount of December rainfall being the main culprit.

“The rain started in mid-autumn and December 2015 was then one of the wettest months on record. Soils became waterlogged and plant roots were left sitting in those conditions for several months.”

Dr Berry highlights that there is a correlation between wet Decembers and low yields for oilseed rape. “There’s a good relationship. The wetter the December, the lower the yield. It limits the crop’s performance later on.”

Mild winter temperatures were also a factor. “Some crops moved into flowering right at the very start of spring, and it then became very cold in March and April. Frost damage didn’t do them any good at all.”

The subsequent lack of sunlight in June was not the whole story, but would have had an effect, he believes.

“Over the past 20 years, dull Junes haven’t always resulted in low yielding years,” he reveals. “But it was one of the dullest Junes on record, so it was a new ballpark and it’s highly likely to have been a contributing factor.”

Despite the lack of sunlight, it was warmer in May and June compared with the average, causing crops to have shorter seed-setting and seed-filling phases.

“They finished off very quickly, which was evident from the small seed size. Seed-filling conditions were poor.”

“It was a very bad year for light leaf spot. It was seen as early as November and it carried on developing, affecting crops in all regions. Yield responses of 0.4t/ha were achieved with fungicides.”

To minimise yield losses from light leaf spot, both varietal resistance and a good fungicide programme are required, he advises.

With phoma, the disease’s development was helped by the rain in late November and December, preventing the timely application of fungicides. ADAS pathologists reported that cankers were observed higher up in the stem than usual, killing branches in some cases.

“Again, it’s about choosing a more resistant variety and spraying when thresholds are reached.”

Verticillium wilt, which occurred in patches, was present in higher amounts than previously seen. However, the absence of a consistent relationship between the disease and yield loss makes it difficult to attribute the season’s lower yield to it.

“I suspect that it was part of the mix,” notes Dr Berry. “We know that some varieties suffer lower yield losses from it, and lengthening the rotation can reduce the risk, but little evidence that fungicides can help.”

He adds that cabbage stem flea beetle larvae boring into stems may also have had a detrimental effect on yield, by restricting seed filling, and reveals that a new three-year AHDB-funded project will investigate this further.

“These larvae can be controlled by spraying in October/November with a pyrethroid, but results can be variable because the pest may be resistant to the insecticide and it is difficult to make contact with the larvae inside the petioles.

“It is possible that mowing off the crop in the winter, when the larvae are in the petioles, gets rid of them and then allows the crop to recover.

“Previous mowing experiments in uninfested crops have shown either zero or very small yield losses, so this work will be repeated in trials with cabbage stem flea beetle infestation.” 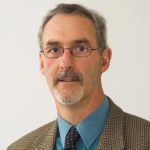 There’s no doubt that oilseed rape was up against it last year, with fields resembling a battleground at certain times of year, reports Dick Neale of Hutchinsons.

As a result, he estimates that on-farm yields were down by 25-30%, with huge variation being recorded as the combines rolled.

The reasons for this drop? In Mr Neale’s opinion, armies of pests and some endemic diseases, all compounded by a lack of sunlight at the end of May and throughout June, were responsible.

“If we had seen some sunlight in June, things would have been better,” he says. “Any crop that was early to harvest this year suffered from low yields.”

Plants are converters of sunlight and levels were at an all-time low at the most important stage of the crop, he adds. “It’s unlikely to be an annual occurrence and it didn’t only affect rape. Winter barley and the very early wheats were hit too.”

Otherwise, verticillium wilt knocked a hole in yields again, he reports. “Unfortunately, it’s a disease that comes to the fore when we drill early. But due to pressures from cabbage stem flea beetle, slugs and blackgrass, that’s exactly what many growers had to do.”

“You need three years of screening work to be sure of the results,” he explains. “However, oilseed rape varieties tend to move on faster than that, so by the time it is available the information is too late.”

The fact that the pathogen is now widespread in soils means that there is potential for it to transfer to the new crop as it is drilled. “When soil temperatures are above 15C, the risk is greater. So earlier drilling plays right into its hands.”

Even varieties that have a degree of tolerance, such as Campus, are open to attack when they are sown in early August, he warns.

Mr Neale points out that growing oilseed rape less often would help make it less of a problem. “Every seed lot carries a degree of contamination, as it is transferred in the dust rather than by seed infection. However hard you try, cleaning can’t deal with every speck of dust.”

Light leaf spot is now a year-round issue, with continued carryover of inoculum, he notes. “Crops are carrying infection right from the moment they start growing, which is why it is so important to pick varieties on the basis of their disease resistance scores.”

Azoles are still the main fungicide armoury for controlling the disease, but resistance to them is starting to build, he acknowledges.

“Again, it’s another reason why growers should make good use of variety ratings – the difference between a 7 and a 4 is phenomenal, especially with early drilled crops.”

Increasingly, growers do have the ability to spray their acreage on time, he says. “You do need to be pre-emptive with light leaf spot and predicting the initial infection is difficult. Phoma is different as there is an established plan of action and reliable spray thresholds.”

Mr Neale’s experience is that the second autumn spray has the most impact on light leaf spot. “The application made at the end of November seems to be the critical one. Of course, it needs to be followed up in February.”

Where growers are only planning to spray once, the dose must be robust, he advises. “You still have to spray resistant varieties, so use the rating as part of the fungicide programme.”

Cabbage stem flea beetle, which also took its toll last year, has two stages – with crops that survive the adult feeding attack as they emerge often having to contend with a larval infestation as well.

“Last year, due to the very mild conditions, there was active infestation all the way through the winter to March,” recalls Mr Neale. “That meant that by April, some five to six layers of leaf petiole were full of larvae.”

Mr Neale’s final point is blackgrass. “Due to a variety of reasons, there were plenty of open crops by the end of February. As the spring arrived, so too did the blackgrass – which nearly always has an effect on yield.”

Growers wanting to gain a better understanding of how to improve oilseed rape yields should take the opportunity to join the ADAS-led initiative Oilseed Rape Yield Enhancement Network (OSR-YEN), which is open for entries for the first time.

Reflecting the successful cereal crops initiative, the YEN focus is on closing the gap that exists between potential yields and current farm performance.

“Oilseed rape has the potential to achieve yields of over 9t/ha,” says Pete Berry of ADAS. “The aim is to help growers and agronomists overcome some of the current challenges.”