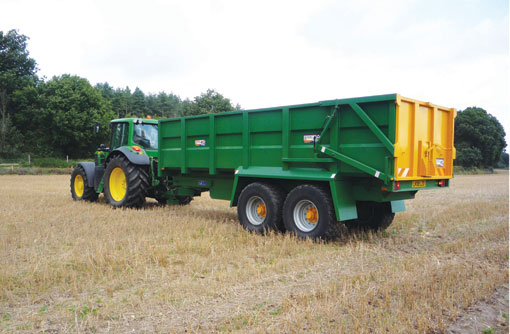 Understanding the impact of machinery on soils is important for growers hoping to maximise yields, according to a leading advocate of controlled traffic farming.

“Compaction has been happening for a long time,” says Dr Chamen. “But modern, heavy machinery is accelerating the process and driving it deeper.”

However, his six-year study confirmed that significant soil damage can also inflicted by relatively light vehicles running repeatedly over the same ground. And the work – a combination of literature searches and replicated field trials – found significant variation in the effect on soil of different rubber tracks.

“In China, even hand-operated machines working intensively at half-metre widths have been shown to be building up compaction at depth. And not all tracks are equal – some are clearly better than others in terms of easing compaction,” says Dr Chamen.

“The literature confirmed that soil compaction from field vehicles has negative consequences for practically every aspect of crop production. It increases the energy needed to establish crops, compromises seed-bed quality and crop yield, and leads to accelerated water run-off, erosion and soil loss.

Trials at FB Parrish & Son’s farm at Chicksands, Bedfordshire, showed that compaction is created by a combination of loading and peak contact pressure. The work also highlighted its resulting downsides (see box).

“The critical thing is to acknowledge how things are changing and to make sure we don’t compress soils any more than necessary.”

Initially, low ground pressure (LGP) systems seemed the way ahead. Based mainly on wider low pressure tyres to spread machinery loads, they became popular in the 1970s. “But we’ve found that their repeated use over the same tracks tends to build up compaction near the surface faster than in the subsoil. The best solution is a large diameter, good-quality tyre of modest width.”

“Our subsoils are being compromised, although the yield losses may actually be quite small – perhaps 1%. So the cost in terms of crop performance may be quite modest, while the cost of repair – through deep loosening – may be quite high.

“And even when you’ve sub-soiled, the results can be quite short-lived because the loosened ground becomes more vulnerable to re-compaction.”

The field trials highlighted the individual nature of rubber tracks. “We did cone resistance tests with them and found significant differences.

“Growers need to realise that rubber, which is designed to be flexible, can’t withstand much loading. Where high loads pass through only two idlers, for example, we saw enormous peaks in soil pressure. A machine with plenty of idler wheels is likely to be kinder to the soil structure.”

Avoidable compaction can also occur if tracks do not remain in complete contact with the land, he adds. “A poorly managed twin-track system, for example, can tip backwards slightly, creating enormous pressures on the rear end. Where four tracks are placed on the ground in the same way as four ‘wheels’, that can’t happen.”

Mr Chamen, who has been promoting controlled traffic farming for nearly 10 years, maintains that it can be a practical alternative, with several UK case studies proving the point in recent years with high level satellite guidance systems.

“It has the fundamental advantages of maintaining all aspects of good soil structure with lowered inputs of energy and time.

On a commercial farm in Nottinghamshire, machinery investment under CTF fell by more than 20% and the gross margins increased by 8-17% depending upon yield response, he says.

“Already we are seeing systems where 80% of field areas have no traffic over them at all. That means they can then be managed according to what’s best for both the soil and the crops.”