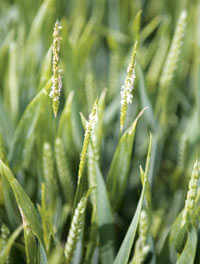 Pre-emergence sprays are the key for David Rush to keep Atlantis available for future blackgrass control.

Forethought, long term planning and the rotational use of different pre-emergence herbicides is helping to keep blackgrass at low levels on a Suffolk farm.

Both Avadex and Crystal are being used on David Rush’s farm at Fressingfield, with the aim of taking the pressure off the follow-up spray and keeping some chemical options available for future challenges.

“But as these last two products are no longer available, we had to come up with an alternative programme,” he says. “And with the product choice narrowing, it was important to consider protecting the chemistry that was left.”

As a result, Crystal was used for the first time last year on part of the farm. “The idea was to alleviate some of the pressure being put on Avadex, while still keeping on top of the blackgrass.”

Atlantis has been avoided to date, says Mr Warner. “Blackgrass isn’t present in large numbers, although there are pockets of the weed in some fields. So we’ve been able to keep Atlantis up our sleeves for now. Even Topik is only just starting to be used.”

This season, the plan is to use Avadex on the first wheats and Crystal on the second wheats. “It’s easier to get on the land after a first wheat, so the application shouldn’t be a problem. Avadex must be applied pre-emergence, but Crystal can go on pre- or peri-emergence.”

Both products cost about £30/ha, he says. “Providing the conditions are right, they’re both very effective. We will be adding some DFF to the Crystal.”

The follow up treatment will be based on Topik, with either DFF or pendimethalin being added, depending on which pre-emergence treatment has been employed. “There’s no evidence of target-site resistance on this farm, but we’re still following the guidelines and using both mixtures and sequences.”

Taking out the blackgrass as early as possible is important, stresses Mr Warner. “We’re getting very good weed control results, without having to resort to Atlantis or a spring treatment. The post-emergence spray is going on at full rate and with oil included, timed for when the weed is at the two- to three-leaf stage.”

Mr Rush says the farm’s rotation also has a part to play. “We have a rigid seven-year rotation, which includes vining peas, spring barley and oilseed rape, so we manage to avoid blackgrass seeding in some years.

“As a result, the weed is not a big problem and the fops and dims still work well, but we do restrict their use and mix them with other chemistry.”

He also makes use of ploughing and doesn’t start to drill his wheat until the last week of September. “All of these things help to make a contribution. Blackgrass control is a long-term game.”

Previous problems with wild oats in barley taught him the dangers of becoming too reliant on any one type of chemistry. “Until Avadex came along, we were in trouble. It served as a warning about blackgrass in wheat.”

But the loss of two useful herbicides means weed control costs are likely to rise in the coming years. “Both IPU and trifluralin were cheap products. I’ll be spending a bit more on the alternatives, but the overall strategy isn’t changing.”

The research is aiming to develop programmes and strategies that avoid the use of Atlantis, as resistance to the product is increasing. But at higher blackgrass populations control in excess of 95% could not be achieved without the product, the first two years of research found.

However, at lower populations good control was achieved using stacks or sequences of at least three to five active ingredients – all of which featured flufenacet.