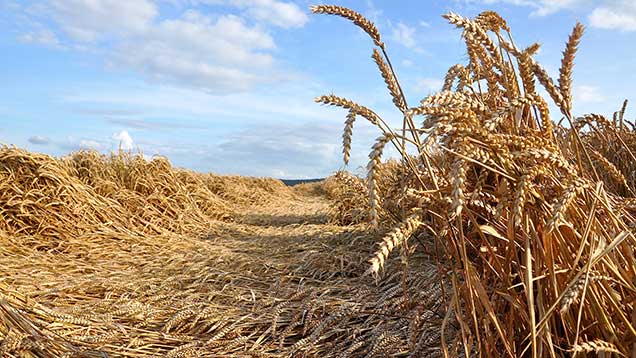 The combination of early sowing and good crop establishment have increased the risk of lodging in winter cereals this season, which can result in large yield losses.

In HGCA guidance, the levy body says up to 75% of yield can be lost if crops lodge at ear emergence.

While later lodging has less effect on yield, it will impair quality and add to drying costs.

According to Peter Berry, Adas senior research consultant, a mild autumn combined with many crops being drilled in September has led to thick growth in cereals.

This has resulted in two key lodging risks – poor anchorage due to tightly-packed plants having limited space for root spread; and weak stems due to large numbers of competing tillers.

“What determines anchorage strength is how widely-spaced plants are,” says Dr Berry.

“Crops that establish well and that are drilled at a high seed rate will have smaller root anchorage systems. Crops with a dense number of tillers – either through close plant spacing or lots of tillers per plant – will have weaker stems.”

In response, he suggests that growers consider cultural and chemical practices for lodging management, such as rolling in suitable conditions to consolidate the soil around roots, and applying plant growth regulators (PGRs).

The first nitrogen fertiliser application can also be delayed in winter wheat to try to thin out tillers where necessary, he says, but there is less scope for this in barley as this can damage yield potential, he stresses.

Rolling must also not be done after GS30 otherwise it could damage the growing tip, and PGRs should be applied as a split programme and in mixtures to maximise efficacy, he points out. A mixture of Moddus (trinexapac) and chlormequat is a good combination, he notes.

“Two splits at T0 and T1 are fine for early-type PGRs such as Moddus. We’ve got evidence that splitting gives bigger effects. And mixing, because sometimes conditions may mean one active ingredient works better than another.”