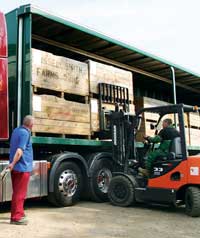 Large potato yields have boosted overall potato production by 3.5% this year, according to the Potato Council‘s first provisional estimate.

“The growing season this year in most parts of the country has been favourable, with sufficient rain and sunshine for optimum growth, without excessively wet or warm conditions,” said the report. “However, during the latter part of the season, it became very dry, especially in eastern England, which led to difficult harvesting conditions. This tended to result in poor skin finish, and later high dry matter levels and excessive bruising during lifting. As a result it is expected that wastage will be high during the 2009/10 trading season.”

Harvest was 98.6% complete as of 13 November – slightly ahead of last year. But wet conditions were now delaying harvest, particularly in Scotland.