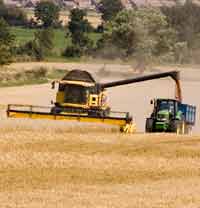 The International Grains Council has increased its estimate of world wheat production to 666.8m tonnes – 20m tonnes below the record 2008/09 crop.

Smaller crops in the EU and South America were offset by increases in the Black Sea and USA, and wheat stocks in the major exporters were likely to reach a four-year high. The IGC also increased its forecast for world maize production, by 4m tonnes to 788.9m tonnes, with the US crop close to the 2007 record.

However, global wheat area was likely to fall in 2010, said the report. “Planting of winter wheat in the northern hemisphere mostly progressed well, despite wet weather in North America and dry conditions in parts of Europe, the Black Sea region and Near East Asia. Some growers, especially in the US, have been prompted by the recent fall in wheat prices to reduce sowings, and the global wheat area in 2010 is expected to be smaller than this year’s.”