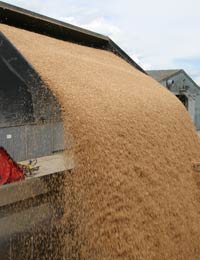 Wheat, maize and oilseed prices are projected to remain historically high over the next decade, according to the US department of agriculture’s annual long-term forecast.

It expects global prices to remain stable at around today’s levels until 2019, assuming no unforeseen weather or economic shocks. Renewed economic growth following the recession will help to boost world demand and trade for agricultural products, it says. “Consequently, although crop prices have dropped from their mid-2008 peaks, they are projected to remain historically high, above pre-2006 levels as a result of increasing world demand for grains, oilseeds and livestock products.”

Growing demand for biofuels will help to support prices, with expansion of biodiesel use in the EU boosting demand for vegetable oils. Although livestock producers continue to adjust to the higher feed prices seen in 2007 and 2008, the report expects US farm incomes to improve. “Increases in production expenses offset some of the gains in cash receipts, resulting in net farm income rising moderately from 2011 to 2019. US retail food prices increase more than general inflation through 2012, but then return to a longer term relationship of rising less than the general inflation rate over the last half of the projection period.”