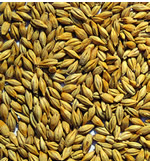 A trial comparing the nitrogen use efficiency of four breadmaking wheats found Marksman was the best for achieving the 13% grain protein requirement, but would not necessarily give growers the highest yield or grain quality.

Four nitrogen rates were applied to Solstice, Marksman, Xi19 and Mascot, to see if there were differences in their nitrogen use efficiency.

“At a rate of 150kg/ha N, none of our chosen varieties achieved 13% grain protein, although Marksman got very close at 12.7%,” explained Richard Fenwick.

But when the rate was increased to 200kg/ha N, three varieties – Solstice, Mascot and Marksman – achieved the breadmaking standard, with Marksman doing best at 13.7%.

“Xi19 gave the highest yield at this rate, but didn’t get the required grain protein. It needs very high nitrogen applications to do both.”

Although Marksman appeared to be the most efficient user of nitrogen, Solstice proved to be the best compromise, Mr Fenwick added. “Solstice offers yield, protein and Group 1 quality. That’s why it’s the top Group 1 variety now.”