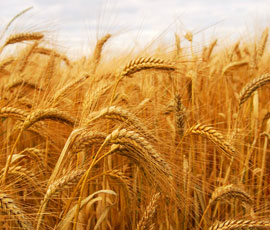 Protesters are planning to descend on the gates of Rothamsted Research in Hertfordshire as part of a campaign against genetically modified wheat.

The group, called “Take The Flour Back“, has launched a website campaign to protest against the aphid-resistant wheat trial at Rothamsted.

They say they are planning a “mass action against genetically modified wheat” at the research institute’s headquarters.

An announcement on their website says: “Bakers, farmers, growers, allotment holders, scientists, beekeepers, and people who eat food are turning out to voice their opposition to GM crops coming back to the UK.

“Meet Sunday, 27 May, at noon, in Rothamsted, Harpenden, Herts. Or take your action in your own way, at your own time. Together we can stop this trial.”

For the trial, Cadenza wheat has been modified to produce a non-toxic odour – (E) beta-farnesene (EBF), a naturally occurring chemical found in peppermint plants, which is releases to act as an alarm signal to keep aphids away and attract their native predators, parasitic wasps (Braconidae).

But the group claims that the trial, which was planted on 23 March, is testing a “brand new synthetically constructed ‘fake’ gene that is most similar to one found in a cow”.

“Even the USA has abandoned attempts to commercialise GM wheat because there is no market for it,” the group says.

The group is concerned that the trial is happening in the open air, adding: “When it starts to flower it can cross contaminate other wheat crops and wild grasses”.

“This is a real threat. In Canada there is no organic oilseed rape left because all the farms have been cross-contaminated with GM rapeseed,” the group says.

Scientists at Rothamsted announced the planting of the GM wheat trial at a news briefing in London last Wednesday (28 March).

Speaking at the briefing, John Pickett, head of chemical ecology at Rothamsted Research, said the centre had made plans for possible protests.

“They are small plots, eight 6m x 6m plots, separated by various buffers,” said Prof Pickett. “There’s a big fence around it and a ditch. We have got to keep out vertebrates – pigeons, rats and mice and hedgehogs and so on, because of the rules.”

DEFRA has given permission for the trial to run for two consecutive seasons. It is costing more than £1m of public money and being funded by the Biotechnology and Biological Sciences Research Council (BBSRC). In addition, security on the site is costing £120,000.

Maurice Moloney, director of Rothamsted Research, said: “We are aware of this protest and have written to the organisers to see if Rothamsted Research can be of assistance on, or leading up to, the planned day of action. We are committed to engaging people with a diversity of views around our work.

“We would be pleased to provide a platform where representatives from their group and Rothamsted could present their perspectives on this issue.

“Our scientists will also be on hand to listen to the protestors’ concerns and to discuss the trial. We will also make ourselves available to speak to this group before the public day of action, if they wish.”