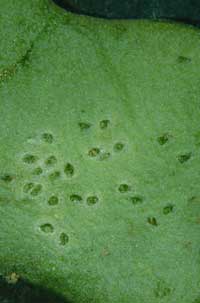 Leaf miners appearing in oilseed rape fields across the country are causing concern, especially in backward crops struggling to establish in dry soils.

But ADAS entomologist Steve Ellis says although the larvae are unusually widespread this year, they only attack older, outer leaves which die in the winter anyway.

“Leaf miners can kill leaves, but this doesn’t seem to affect yield. And many of the larvae are now very close to pupating, so they are not going to do a lot more damage.”

There are two forms that attack the crop. The cabbage leaf miner is usually the most common, but the main culprit this year is scaptomyza, which forms characteristic “blotched” mines.

Even if growers were tempted to spray, there are no approved chemicals to control either type in oilseed rape, says Dr Ellis. Trials targeted at other pests this season should show which seed treatments offer control, he adds.

Miners usually produce two to three generations a season, and Dr Ellis reckons each has flourished this summer. “We have seen serious infestations in baby-leaf brassicas, where 40% of leaves have had penetrative holes.”

Scaptomyza feeding punctures in OSR cotyledons are a common sight this year.