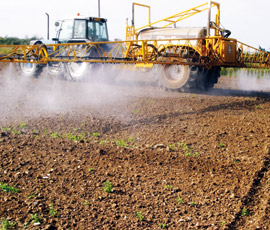 A perfect storm is brewing in the weed seed bank, with a year and a half’s worth of blackgrass seed possibly germinating this autumn.

This could give growers an excellent chance for cultivation or glyphosate control of the weed but they may not have the patience or the time to wait.

With a late harvest and a likely move to early drilling after last season’s wet autumn, many will simply want to push on and get crops sown.

Richard Peake of Harlow Agricultural Merchants (HAM) believes many growers will still rely heavily on herbicides which present a number of useful options.

Mr Peake says the high dormancy and low germination experienced last year is likely to be followed by the complete opposite this year.

The weather has really been conducive to a “double whammy” – blackgrass producing a lot of dormant seed last season and now ready to germinate this autumn.

“Hopefully we will get a damp period at the end of August, allowing for a germination that can be killed off.”

But if growers lack the patience, then herbicides with alternative modes of action will be critical, especially with the increasing problems of meadow brome and wild oats.

Learning lessons from last year, Mr Peake says growers need to look at where blackgrass has come through herbicide sprays in the spring.

Then consider the resistance status in the field and contribution that can be expected from Atlantis (iodosulfuron + mesosulfuron).

Using this and trials carried out at HAM in Essex, Mr Peake sees chlorotoluron (CTU) and diflufencian (DFF) as good additions to flufenacet-based sprays.

“By far the best treatment we have seen in our trials is the Avadex (tri-allate) followed by Crystal (flufenacet + pendimethalin) +DFF.

“Adding DFF is essential to the Crystal. Our trials show it adds another 12% control on average,” he explains

Meanwhile, Mr Peake notes that his trials over six years have shown Crystal (flufenacet + pendimethalin) to give 15% better control than Liberator (diflufenican + flufenacet).

“We really value pendimethalin and this shows the importance of it.”

One issue growers will have, if they wish to implement this programme, is spreading the Avadex granules.

Mr Peake believes only about 10% of growers currently have the suitable applicators or can hire contractors to spread them correctly.

“If you have a serious blackgrass problem this sequence is head and shoulders above the rest, achieving close to 100% control in trials,” he says

Mr Peake has also warned growers who were able to get good control of blackgrass last year not to rest on their laurels.

“Whatever residuals growers used last year – and it worked well – they should use this year as a minimum.

“You have to do a robust treatment where you have got bad blackgrass problems and Avadex, Crystal + DFF is extraordinarily good.”

Growers who are unable to use the Avadex granules could use Crystal and DFF, with Mr Peake advising Buckler (chlorotoluron + diflufenican) or even Lexus (flupyrsulfuron) as additions to flufenacet

Mr Peake advises where growers cannot use Avadex, don’t put a sensitive variety on those fields – this will then allow you the option to use Buckler.

Meanwhile, Mr Peake says patience will be needed, with three years of trials using fixed quadrats showing 75% of blackgrass that comes through the Crystal DFF (not Liberator) survives through Christmas but then dies before the end of March.

“The farmer should look at wheat crop at leaf stage one to two. Assess the blackgrass that has come through this and estimate that 75% will die.

If this still leaves too much, he has then got to come back with a post-emergence spray of Buckler, Atlantis or Unite where the blackgrass is sensitive.”

Another option is to use Crystal DFF and Lexus. This is a pre-emergence tank mix and according to Mr Peake the Lexus is probably giving another 7% better control over the Crystal + DFF.

“So we are looking to base our blackgrass control using the residuals. We are not planning to use Atlantis in my programmes because of widespread resistance. You may have to but you shouldn’t plan to unless you know the resistance is not there.”

Andrew Fairs, who farms in East Essex, is one of the many growers across the country who suffers from blackgrass problems.

Based on medium loam soil, he notes areas of continuous wheat are where he experiences the majority of his blackgrass problems. Mr Fairs is looking to build on previous experiences – this year favouring the Crystal+ DFF with the adjuvant Backrow.

“I would say 80% of the Liberator I sprayed in the autumn I had to overspray with Atlantis in the spring.

“But with the Crystal + DFF, I would say I only had to overspray 15% of it. I just think the different chemical used makes it more effective and the blackgrass isn’t resistant to it.”

Following a tough season, Mr Fairs is looking to give the blackgrass more attention than ever on some areas of his farm.

One of the first points of call will be to get an early green flush – however, he admits this is unlikely.

“Then on the worst areas we are going to go with a pre-emergence of 15kg of Avadex and then a very early post-emergence of Crystal and DFF.

“On the areas that are not so bad we will go with a pre-emergence of Crystal DFF + Backrow, which will help keep the residual chemical up in the blackgrass germinating zone.

Not relying solely on Atlantis will be key, according to Mr Fairs, who admits it’s going to be another tough year in the fight against blackgrass.

While for most farmers blackgrass will be the key priority, growers are also being warned of increasing problems with meadow bromes and oats, says Mr Peake.

Typically, they have not been too high on the farmers list of issues because the wide use of products such as Atlantis and Unite has controlled them.

However, with growers looking at different options to control their blackgrass, these weeds are once again rearing their head

Applying a pyroxsulam based spray in the spring has gone some way to addressing the problem.

“Something that was clear from the six trials, is that meadow brome is not controlled by any pre-emergence, or early post-emergence residuals.