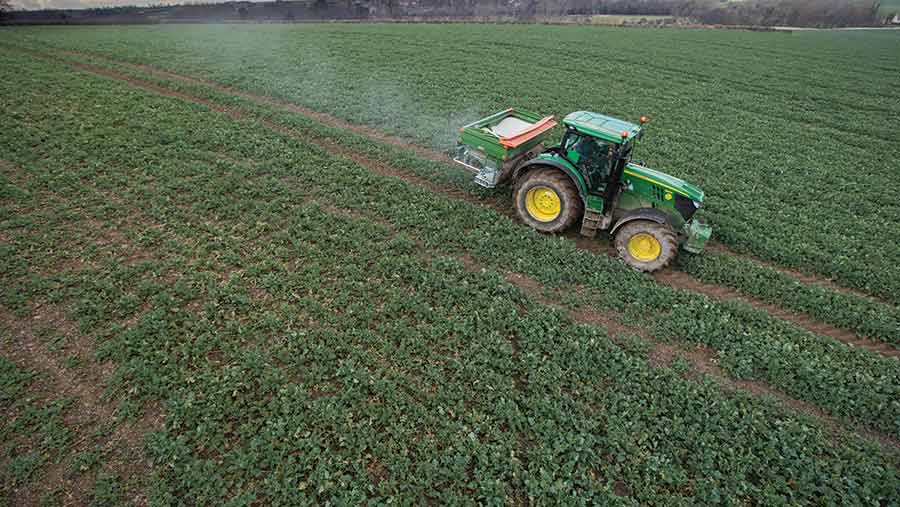 Taking a more accurate approach to calculating nitrogen fertiliser use could help revive the fortunes of oilseed rape on some farms, at a time when margins are being squeezed by rising costs and low prices.

This increase was achieved through a combination of an additional 0.7 t/ha of rapeseed yield and a 127kg/ha cut in nitrogen below the farm’s normal rate.

“Soil is our biggest asset and fertiliser plays a key role in getting the best from it,” says Chris Richardson, who farms 400ha of heavy to sandy clay loam soils at Grove Farm, Swaton near Sleaford.

“We are always striving to do things better, to optimise yields and grow crops or varieties that provide the opportunity to achieve a premium. When it comes to fertiliser, the goal has always been to maintain our P&K indices and optimise the use of nitrogen.”

Included in that area is 40ha of high-oleic, low-linolenic (Holl) oilseed rape and 31ha of salad rape for seed, together with 190ha of first and second wheat, 32ha of oats for human consumption, 32ha of spring barley, 30ha of spring beans and 12ha of grass.

“Fertiliser is one of the largest single expenses, so we have to make the most of it,” says Mr Richardson.
About eight years ago, he looked at optimising nitrogen inputs by estimating soil nitrogen supply and started by getting four fields sampled by his fertiliser supplier ACT, for soil mineral nitrogen (N-min). Then he compared CF Fertilisers’ recommendations calculated using the test results with his current approach of using RB209 figures.

“We have always maintained a high level of soil fertility, but still found it hard to accept the nitrogen recommendation that came back, which was considerably lower than we had been applying on oilseed rape,” he says.

“We, therefore, carried out on-farm trials, while continuing to use our normal farm N rates on fields that had not been N-min sampled.

“Now, having built up faith in the system and learned to trust it, we have about eight samples taken in January each year from representative fields and base all our nitrogen applications on the results.”

In 2015, N-min samples were taken by Arthur Baldwin of ACT in two fields of OSR, which were representative of those across the farm

The results showed in the first field, the total soil nitrogen supply (SNS) was 145kg N/ha, comprising 70kg N/ha in the soil and 75kg N/ha from crop. In both cases the crop contained more N than was applied in the fertiliser and the predicted SNS, suggesting the supply of N was supplemented by the crop scavenging from further down the soil profile.

Mr Richardson was advised to apply 141kg N/ha in order to fulfil the requirements for a target oilseed rape yield of 4.5 t/ha, equivalent to applying 409kg/ha of ammonium nitrate and including 30kg N/ha when drilling in the autumn.

Although the recommended application rate under the N-min system was significantly lower than the 185kg N/ha (536kg/ha of ammonium nitrate), which the farm would typically have used previously for oilseed rape, the yield achieved was significantly higher at 5.3t/ha compared with 4.6t/ha.

This was borne out in a second field, where the total SNS was 130kg/ha, comprising 67kg N/ha in the soil and 63kg N/ha from the crop. Using the same rates of nitrogen resulted in a yield of 5.4t/ha for the N-min recommendations compared with 4.7t/ha for the normal farm rates.

Overall, the financial benefit of following the CF Fertilisers blueprint amounted to £14,555, or £205/ha – the difference in the margin over fertiliser costs of the N-min area (£1,255/ha) and the area which used farm rates of nitrogen (£1,050/ha).

“During the years we have used N-min I have always found the rates of nitrogen it suggests have produced equivalent or better yields than we achieved previously.

“But this extra yield came with the added benefit of a significant saving in the amount of fertiliser applied and lower costs,” he says.

“But because agronomists are usually not fertiliser specialists, most farms rely on the standard nitrogen rates contained in Defra’s fertiliser manual RB209.”

As a result, she believes farmers often end up applying too little or too much bagged fertiliser, which increases variable costs without improving yields.

“A better approach is to use N-min to calculate the exact rate of nitrogen required so it can be applied precisely to maximise crop profitability,” she says.

Using guidelines from Defra’s RB209 fertiliser manual alone to decide on N rates may lead to growers applying too much or too little bagged fertiliser.

The merits of soil mineral nitrogen (SMN) sampling has been debated for years, including whether it should be used just on high-N fields.

But with only half of fields estimated to have predicted N levels within 50kg/ha of Fertiliser Manual figures, there is scope for N-min to be used more widely on farms to reduce input costs.

Its value was highlighted in an AHDB project, reported in 2012, with the aim of producing new guidelines on the use of N-min.

CF Fertilisers was also involved in the project and used the findings to refine its N-min service.

N-min is a measure of soil nitrogen and not only includes the amount present in the soil, but also the amount that will become available to the crop between spring and harvest.

How do you calculate optimum fertiliser rates?

Calculating the optimum level of nitrogen to apply is complex because it depends on numerous factors, including soil type, organic matter, soil temperature, previous cropping and winter rainfall.

Other considerations include current crop, yield and quality expectations, the amount of nitrogen already taken up by the crop in spring and many others.

N-min is particularly recommended in new fields, those with an unknown history, where organic manure has been applied, where high organic matter is present in the soil, on farms with diverse soil types and fields that have grown crops which are known to leave behind large residues of nitrogen.

The best time to sample is in the spring, before the first fertiliser application and at least six weeks after the last manure application.

Samples are then analysed for SMN content and incubated to establish the level of additional available nitrogen (AAN). Total AAN is adjusted to account for nitrogen supplied from the soil at a depth of 60-90cm and allowances made for leaching losses, deposition and uptake efficiency.

The use of sewage sludge and anaerobic digestate combined with having variable soils meant there was scope to optimise nitrogen fertiliser use on the Sundorne Estate.

The adoption of N-min testing by Jon Birchall of Balfour LLP led to an additional net margin of £130/ha from oilseed rape last season.

Mr Birchall took on the management of the Sundorne Estate just outside Shrewsbury two years ago, farming 606ha of mainly sandy loam soils. Charged with farming sympathetically and sustainably, yet still delivering the best financial performance, he has focused on every area of the business.

“The aim is to achieve higher net returns than from the previous system of long-term tenancies and farm business tenancies,” says Mr Birchall.

“I first used N-min 15 years ago and quickly realised the need for it on the Sundorne Estate, for a number of reasons.

“One is that we have significant tonnages of sewage sludge and digestate from anaerobic digestion plants coming onto the estate and these are very variable in terms of their nutrient content.

“Soil potash levels are also very low because the estate is close to the Welsh borders and has traditionally sold much of the straw produced, although I am reviewing that approach.”

Because of those factors, the soil nutrient status has been very variable, which is why N-min is now a key part of what Mr Birchall does.

At the beginning of 2015, CF Fertilisers agronomist Allison Grundy took four N-min samples from four fields, one where oilseed rape followed barley, then one with wheat after potatoes, rye following wheat and maize after maize.

“We then used the N-Calc system to tailor recommendations for every crop on the estate, including 167kg N/ha for oilseed rape.”

The recommended fertiliser rates were then compared with those normally used on the estate to produce a 4.5t/ha crop, he says.

“Oilseed rape was drilled at the end of August following barley, established well and the ‘estate rate’ area received 30 kg/ha of nitrogen in the autumn.”

From there on, the total amount of nitrogen applied differed, with Mr Birchall applying the balance of the estate’s usual 190kg/ha to half of the area deemed to have a “good” level of crop N.

The remainder received the blueprint recommendation of 167kg/ha in two applications, the first at stem extension and the second for yield at the yellow bud stage.

“The combination of input cost saving and additional production increased our net margin from the 70ha of oilseed rape by £130/ha, a total of £9,100.”