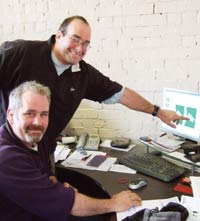 the Pocklington’s first season’s adoption of satellite crop imaging to fine-tune N applications has been encouraging, though not without hiccups.

The pair’s all-arable business, including contract and share-farming from Station Farm, Horton runs to about 485ha (1200 acres).

For 12 years their rotation on mainly heavy clay land has been alternate winter wheat and winter oilseed rape, grown with non-inversion system, latterly based on Sumo equipment.

Despite the threat of disease build up, yields do not seem to have suffered, says Craig. “Where we grew rape on virgin ground recently it was no more than 2-3cwt/acre ahead of the rest.”

But fitting an RDS yield meter to their Axial flow combine 15 years ago revealed how variable output within fields could be. “In particular, it showed the headlands were suffering and led us to install three miles of rabbit netting.”

Five years later the brothers took their first move towards precision farming. “We dipped our toe into SOYL’s field mapping for P and K. But we didn’t find it particularly beneficial, except that it showed that most of our indices were OK.”

But as a result of a mailing from Robin Thompson of Skyfarm, they decided to assess the firm’s N-MAP service last spring.

“I’ve always been wary of N fertilising mainly because of the risk of crops going flat if we get it wrong,” says Craig. “So over the years we’ve tended to put our first dressing on later. The trouble is that if the weather then turns dry the crop may not have time to respond properly.

The Skyfarm service, inherited from Kemira GrowHow UK and based on several years’ plot trials and field-scale research, is being offered to ensure its satellite imaging data continues to be available to existing and new customers, says Mr Thompson. 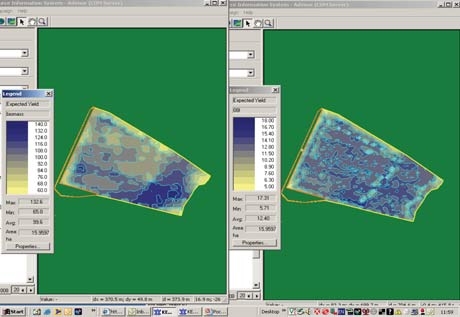 In practice it begins by collecting digital images, both infra-red and visible, of the farm’s fields. These, based on spring biomass measurements, effectively show how crop growth varies and can be used to determine optimum N dressing rates.

Trials from 2004-2007 showed that adopting the concept on fields where growth was especially variable boosted yield by an average 10%, notes Mr Thompson.

With initial images taken, treatment maps are drawn up in discussion with growers based on two approaches. The information is then used to drive variable-rate spreading equipment.

In what Mr Thompson calls the “Robin Hood” strategy N rates are kept lower on areas of high biomass and raised to boost growth elsewhere. The “King John” approach adopts reverse tactics – reserving more N for the potentially most productive areas while avoiding wasting it on the poorer ones.

“We used Robin Hood for the first two and King John for the last because by then it was too late to try to promote any of the backward areas,” says Mt Thompson.

One field, in particular, highlighted the value of doing so (see diagram).

Denton Baulk was originally two fields which show clearly on the left-hand map. Its right-hand end, with the deeper blue areas, borders a former dairy farm, says Craig. “I suspect that’s where they used to put a lot of the muck.”

The result from adjusting N inputs is shown in the map on the right.

Whether the overall yield, which Mr Thompson estimates as well over the brothers’ five-year mean, was all it might have been is hard to tell because of difficult harvesting conditions.

Adopting the new approach also had practical problems, not least intermittent information flow from the PDA to the spreader’s control mechanism. So the brothers are investigating alternatives to continue with the system, being especially impressed by Patchwork’s GPS equipment shown at the recent LAMMA event.

The overall Skyfarm charge is £8/ha, excluding VAT and the PDA lease. If required a second set of images for later in the season can be provided.