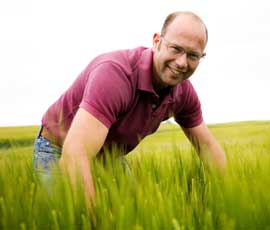 Water use is increasingly coming under the spotlight with predictions that Britain will face a future of water shortages, which could have a huge impact on food production. But a new tool aims to help growers improve their water use efficiency.

This increasing focus on water was highlighted by the government last month as it published its White Paper, Water For life. At the launch, DEFRA secretary Caroline Spelman said that severe weather, population growth and the need to grow more food would all put pressure on water resources.

“We can already see the type of problems we may face, with parts of Britain still in drought even though we are in December,” she said.

With water supplies becoming increasingly precious, LEAF has launched a new tool aimed at helping identify how farmers can make better use of water.

LEAF chief executive Caroline Drummond said: “Mains water costs us about £1.80 per cubic metre – it is an expensive resource.” The tool provides a health check for water use on the farm, and identifies areas where improvements – and savings – could be made.

In addition, LEAF has trained 36 farmers to act as ambassadors and help train other farmers on how to improve water use on a range of farms – whether irrigated or not.

Jake Freestone is one of LEAF’s new water ambassadors, and has implemented a number of measures to save water at Overbury Farms, Tewkesbury, Gloucestershire.

“With climate change we are going to have more varied rainfall, with more droughts and more flooding. It will be key to keep water in the field for longer, and intercept rain to store it. We are spring-fed here and have only had 60% of our rolling 12-months’ rainfall, which does worry me for next year’s crops and livestock.”

Mr Freestone has already installed water harvesting equipment with a UV filter, and is planning to install a further 60,000 litres of storage for rainfall off his grain store roof.

“We can use that for the ewes over winter, and for spraying with.” In addition, land which is sown to potatoes is being monitored for soil moisture deficits, for more targeted irrigation. “We will only irrigate when the soil and the crop need it.” Boom irrigators over onions also reduce wind drift and capping of the soil.

Farmers should work more closely together for more efficient water abstraction and use, and minimise water use when spraying, he adds.

“But a very cheap, easy and effective first step is to monitor water meters and check for leaks – during training I met three farmers who had received significant water bills for leaks they did not know they had.”

Jeremy Padfield, a LEAF demonstration farmer at Church Farm, Stratton on the Fosse, Somerset, trialled different water catchment techniques after taking on a new arable field. “It’s called the Dome, for good reason – it has a 60° slope on one side.”

Not suitably located for grassland, the field had a dreadful runoff and erosion problem. “We tried buffer strips, and although they worked, they weren’t great. So we put in two sediment traps, which took a day’s work with a JCB, and in the first year, with about 800mm of rainfall, we collected 3.5t of soil in one of them. It was very simple and probably cost us £500-£600. We now excavate it every second year and put the soil back on the field.”

Mr Padfield also practices contour drilling and minimum tillage – although he ploughs every three years to keep diseases and weeds down. “Every year we dig lots of pits to test for compaction. Our soils are definitely holding more water – you certainly notice less drought stress in the crops.”

• Mr Freestone has created a video on improving water quality