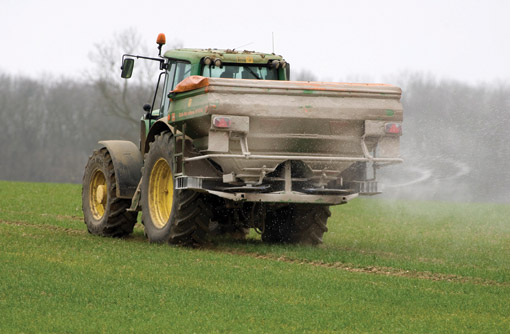 Changing the source of nitrogen fertiliser can cut costs by up to £10/ha, due to the time and machinery cost savings when using a more concentrated form.

This is according to an independent study carried out by business consultants Brown & Co, who compared the costs of using ammonium nitrate and an enhanced urea products such as Koch Advanced Nitrogen (KAN).

The recent slide in wheat prices means growers will be taking another look at getting their costs down, says Guy Plenderleith of Brown & Co.

“The cost of growing this year’s wheat crop is estimated to be about £114/t and fertiliser accounts for 14% of this. Therefore, nitrogen is a key part of the total cost and one area to consider when reviewing costs is the source of nitrogen.”

Urea has long been seen as a cheaper alternative to ammonium nitrate, but it is associated with volatilisation losses as ammonia, which can be as high as 24% in certain conditions. But these losses are much lower with enhanced urea products and one example is KAN fertiliser, which contains Agrotain, which is proven to protect against this nitrogen loss.

To account for the range in farm sizes, Peter Cox of Brown & Co who carried out the study calculated the costs for three different sized farms at 100, 300 and 600ha (see table below).

These were based on the average sizes revealed in the farm business survey carried out by Rural Business Research.

Volatilisation was assumed to be 3% for both fertiliser types, based on ADAS research, and the prices used were ammonium nitrate at £270/t and the advanced urea at £336/t. These were the prices quoted on 28 May 2013.

Mr Cox looked at a range of situations ranging from minimal use of nitrogen fertiliser with significant use of organic manure through to N Max fertiliser applications to milling wheat while complying with nitrate vulnerable zone limits.

He also looked at machinery and labour costs for applying both fertilisers to feed wheat in two splits, totalling 180kg N/ha.

First, there was a saving on a nitrogen basis which equated to £9.68/ha, says Mr Cox.

But there is also a time saving when using the advanced is urea by having fewer refills. This because urea has a higher concentration of nitrogen (46%) than ammonium nitrate (34.5%).

“This bulk density means a spreader containing ammonium nitrate will have 22.5% more weight of fertiliser. Or on the other hand, for the same weight, there is 8.84% more nitrogen with the KAN,” says Mr Cox.

The maximum cost saving (£10.86) was with the 1,500 litre spreader carrying two bags of ammonium nitrate or the advanced urea.

Time saved also varied according to farm size with the greatest saving being for the medium-sized farm at eight-and-a-half hours.

For example, using ammonium nitrate would result in greater depreciation of the tractor as it is driving more, increased wear, servicing and repair. Fuel use and labour requirements would also be greater.

In calculating this cost, Mr Cox assumed that the tractor and fertiliser spreader would operate at the same speed and spreader depreciation would also be the same as it operates for the same length of time.

He calculated that the maximum saving would be £1.18/ha on a small farm using the 1,500 spreader.

There are also practical benefits of using a more concentrated form of nitrogen fertiliser with fewer bags, which amounts to 130 fewer bags for the large farm and fewer lorries to transport the fertiliser. There are also fewer regulations for storing urea compared with ammonium nitrate.

In conclusion, the total financial savings across the three farms is about £10/ha when using the urea product.

“This is quite a considerable cost saving,” adds Mr Cox.