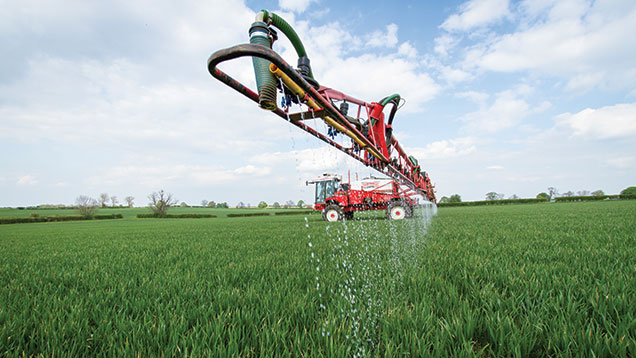 Growers with new high-yielding milling wheat varieties in the ground should push up nitrogen rates to ensure they meet the millers’ specification of 13% protein.

It is being grown widely this year for its attractive disease resistance profile and as growers seek a milling premium at a time when feed wheat prices are depressed.

However, there is a concern that higher yield could result in lower protein levels in the harvested grain, resulting in penalties at the mill eating into profit.

Kent and Sussex independent crop consultant David Jones, of CCC Agronomy, is erring on the side of caution across the area of Skyfall on his clients’ farms, topping up nitrogen rates by about 30kg/ha.

This is particularly important this year, as deep soil cores taken during February have indicated low soil nitrogen supplies (SNS), even where manure was applied.

Growers can apply more N to wheat crops over the legal Nmax limit set out by Defra if they are growing a milling variety, where soils are shallow or where high historic yields can be proven.

“I think Skyfall will behave much like former high-yielding group 1 variety Xi19, which needed much more nitrogen and in some situations you could apply over 300kg/ha of N and still only reach 12% protein,” he says.

One of his clients in Kent is growing Skyfall for the first time this year, alongside fellow group 1 variety Crusoe, and his plan is to apply 290kg N/ha split over four applications in a little and often approach.

This will be complimented by 50-60kg of SO3 (sulphur) and where the contract allows, a foliar urea spray to help hit top milling spec.

“I don’t set a budget and if the crop needs it, it gets it. Tissue tests right through the season make sure that we are on the right track.”
Tom Sewell, Kent grower

“It is going to cost in the region of £23/ha extra, but that will be justified if the variety yields well and we get the quality right,” says Mr Jones.

Kent grower Tom Sewell says he had problems with protein levels last year with Crusoe as his yields hit an average of about 11t/ha and as a consequence suffered small penalties at the mill.

So he is happy to heed Mr Jones’ advice and spend a little extra on nitrogen, particularly on Skyfall, which may provide him with a higher grain yield this season.

“I don’t set a budget and if the crop needs it, it gets it. Tissue tests right through the season make sure that we are on the right track,” says Mr Sewell.

Mr Sewell has also been working closely with an independent soil scientist to try and unlock some of the nitrogen that’s in the soil profile to help his milling wheat hit protein spec.

George Hepburn of Soil Fertility Services says that applying nitrogen-fixing bacteria to soils in the form of liquid product Bio-N has the potential to supply crops with the equivalent of 60-100kg N/ha.

“It contains four types of bacteria that work in a range of conditions and also humic and fulvic acid, seaweed and trace elements. Of the trace elements included, cobalt is very important for the bacteria to survive and do their job,” says Mr Hepburn.

Mr Hepburn says that applying the Bio-N at the right time in the correct conditions could unlock that nitrogen sitting in the soil, and also free locked-up phosphate.

Nitrogen fixing bacteria need a soil temperature of at least 8-9C, along with air – compacted or poorly structured soils aren’t suitable – and moisture.

The Bio-N product is applied around mid-April and releases nitrogen gradually, with tissue tests monitoring nitrogen uptake in the crop and monitor if it requires any more nitrogen.

Good soil health is crucial in getting the most out of the product, so compacted and anaerobic soils will restrict it effectiveness.

“We see it as a product that will work well in grassland and organic systems, but there is increasing interest on conventional farms, particularly where growers are in nitrate vulnerable zones.”

“The right balance of magnesium and sulphur is also crucial as they are important components in chlorophyll production and protein production respectively,” adds Mr Hepburn.

*All fertiliser applied in liquid form