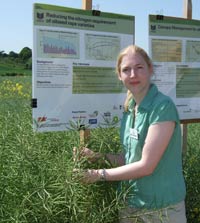 Some winter oilseed rape varieties use nitrogen more efficiently than others, but modern high yielding types need no more N for optimum output than their lower yielding predecessors.

The first finding had come half-way through four years of joint trials with four breeding companies, said ADAS’s Sarah Clarke. It was examining the responses of 29 varieties to the standard RB209 recommendation, averaging 140kg/ha, and to no N at all.

There were firm signs that the varieties Borneo, Canti, Sun, Temple and FD502 performed better than the rest without added nitrogen, noted Dr Clarke.

“It shows there is scope to pick out varieties that do better under low N conditions. The next step is look for areas of the chromosomes, that confer that efficiency. Breeders could then use that to create more N-efficient varieties.”

But the first year’s data from another set of work testing the reaction of five varieties to N inputs of 0-360kg/ha, suggested they were already doing just that. “It shows that high yielding varieties don’t need any more than the others for optimum yield.”

If you plan to test for soil mineral nitrogen (SMN) levels make sure your samples reach the laboratory as fast as possible and preferably within 24 hours, advised ADAS’s Daniel Kindred.

Leaving testing for three days, irrespective of whether the samples were frozen or not, could result in a 30% difference in the result, he warned.

“The N you measure increases fairly linearly no matter how you store the sample.”

The finding had come after the second season of work with several organisations aimed at establishing best practice for estimating SMN.

Autumn use of Soil Essentials’ Crop Circle sensor to assess N in crops had proved promising in highlighting differences in soil nitrogen supply of up to 100kg/ha. The next step was to determine how late the sensor could reliably be used, said Dr Kindred.

This had also proved promising. Using over 161 fields of Xi19 and Hereward, it confirmed previous work that to achieve 13% grain protein the N content in the ears should be at least 1.8%.

“In principle it could lead to a useful system for co-ops and agronomists to offer as a service to growers.”

Mildew’s presence in many wheat crops this season highlighted the weakness of triazole fungicides against the disease, said Jonathan Blake.

Conditions this spring – long, dry spells, but with moisture in the bottom of crops – meant many small late-formed tillers were harbouring the disease, even in relatively resistant varieties like Robigus, he said.

“When you get high levels on susceptible varieties the response to controlling it could be 0.5t/ha, which makes fungicide treatment well worthwhile.”

But under high pressure a triazole was inadequate, warned Mr Blake.

“Proline is slightly better than Opus, but you really need to use a product with good mildew activity.”

The three main choices were Cyflamid (cyflufenamid), Flexity (metrafenone), which also offered some eyespot control, and Talius (proquinazid), which was very persistent. But none was a strong eradicant, he noted.

“So they really need to be on at T1 or earlier.” But late treatment might be justified to protect the ears, he acknowledged.

Two products which growers might previously have turned to were unlikely to help, Mr Blake warned.

“Corbel has shown little mildew activity in the past five years, and Fortress isn’t working very well either as quinoxyfen resistance is now quite widespread.”

Watch out for signs of verticillium wilt in oilseed rape at the end of this month and in early July, urged ADAS’s Peter Gladders.

“By and large it’s a low phoma year, so it should be easy to spot the symptoms,” he said. These, including vertical stripes on the stems, were highlighted in the recently launched ADAS/BASF encyclopaedia.

Inoculation work had confirmed that isolates from the suspected 2007 outbreaks in Kent and Hereford were indeed pathogenic on the crop. “It’s Verticillium longisporum, as we thought,” said Dr Gladders.

“We don’t know how widespread it is, so we want to hear of any reports this year.”