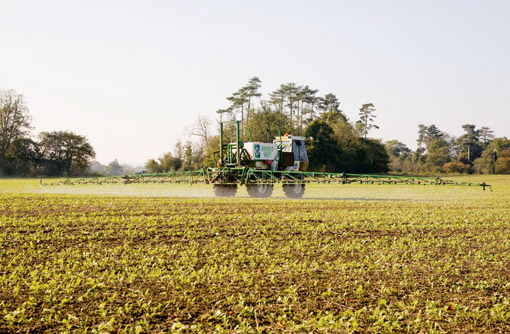 An uncontrollable broad-leaved weed problem forced one grower to abandon growing his most profitable break crop in a number of his fields. But after a gap of six years, novel Clearfield technology has seen oilseed rape make its return.

Charlock and runch populations were so bad that Shropshire grower Jon Harmer’s rape yields in problem fields had plummeted to 1.4t/ha. “Oilseed rape is my number one break crop, so if I lose it I have lost my best break,” he says.

The result was that rape hadn’t been grown in problem fields since 2005, being replaced by other break crops such as herbage seed, peas, beans and linseed. “But none of them are very exciting in terms of performance and margins,” adds Mr Harmer.

So when Agrii agronomist Charlie Prince was at the BASF Clearfield launch, he immediately knew where this new technology could be put to good use. “When rape is at £400/t there is a real need to get it back in the rotation.”

The Clearfield technology is a conventionally bred system, producing varieties of oilseed rape that are tolerant to the herbicide active imazamox. Cleranda, the BASF herbicide, contains imazamox and metazachlor and can only be applied to oilseed rape varieties carrying the Clearfield brand, or total crop loss will occur.

This season was the first year he tried Clearfield and drilled 5.3ha of DK Imagine CL. His establishment method is based on subsoiling followed closely by a Pottinger Terrsasem drill, which is disc-based with press wheels behind each coulter.

“We didn’t plant the crop until mid-September and germination was delayed until the end of the month; all the varieties were slow emerging because of the uncharacteristically dry weather experienced last autumn. Moisture is never a concern in Shropshire, but we didn’t roll behind the drill which may have been a mistake,” says Mr Harmer.

“Clearfield has totally transformed the fields where charlock and runch were once so prolific; it’s phenomenal, we couldn’t see the rape for these weeds. We didn’t hold out much hope, but it worked and now we wouldn’t be concerned about growing it wherever we have a problem.

“Volunteers are becoming a real problem for rape growers so planting Clearfield is a good way of controlling volunteer numbers, too. If we are getting volunteer problems from previous rape crops there will almost certainly be a yield and oil penalty to be paid,” adds Mr Harman.

“I have a client who has established a rape crop planting 40 plants per sq/m, but has ended up with significantly more,” says Mr Price. “It makes a mockery of canopy management when you end up with such high plant populations. I see Clearfield having a role to play in controlling volunteers.”

“Some of this year’s growers hadn’t realised that Cleranda has some activity against cereal volunteers, however, adding the adjuvant Dash HC will enhance its performance further,” says Will Reyer, field crop marketing manager at BASF.

In general terms the agronomy is very similar in both Clearfield and conventional types. Fertiliser management and timings were identical on both crops. Trace element, fungicide and herbicide applications were similar, and the only exception was the Clearfield’s Cleranda treatment which was applied on 25 February.

“All the OSR crops went in late to pretty unfavourable conditions, but came back fantastically well. A lot of rain in April saw hybrids lodge badly, but DK Imagine CL was looking good on the back of being later maturing.

Clearfield varieties currently are not as high yielding as the leading conventionals. But as Mr Harmer points out: “It is either this or no rape at all and getting 95% of the yield of the top conventional types is worth having.”

“Our five-year average is around 4.3t/ha and the non-Clearfield varieties this year (DK ExPower, Sesame and Compass) yielded 3.2t/ha which is disappointing following last year’s exceptional performance of 5t/ha. DK Imagine CL yielded the same, showing no yield penalty.

There are four varieties in the Clearfield range that will be branded CL to avoid any mix-up with conventional varieties: DK Imagine CL, PX100 CL, PT200 CL and hybrid Clifton CL.