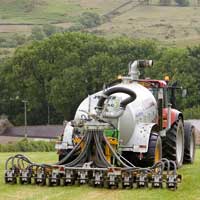 Farmers in areas of Wales designated as Nitrate Vulnerable Zones are tapping into a £3.1m grant scheme to get additional slurry storage in place before the regulation comes into force next January.

So far more than 130 farmers have expressed an interest in the Welsh Assembly Government scheme, and £440,000 has already been allocated.

In addition to financing slurry storage, grants are available for other pollution prevention work, including roofing livestock yards and silage stores. Watercourse fencing also falls within the funding criteria.

Among the first farmers to benefit were John and Richard Knowles, who installed a below-ground concrete store at Honkley Farm near Wrexham. They have been injecting slurry since 2008 which they believe has given a better uptake of nutrients and helped milk yields.

Richard said the cost burden of NVZ compliancy had been eased by the grant scheme. “There is no doubt putting in extra storage to comply with the regulation is very costly, but we are pleased that the assembly government has recognised that there is an extra cost to meeting the requirements and is giving us a helping hand to erect the infrastructure, improve our business and look after the environment,” he said.

Other eligible farmers are being urged to get their applications in. Rural affairs minister, Elin Jones, stressed that only a limited amount of money was available.

“Many farmers are looking to improve slurry stores, which can cost in the region of £80,000. This grant scheme helps farmers make these vital changes,” she said.

The scheme is open until 31 December 2011, by which time all work must be completed.