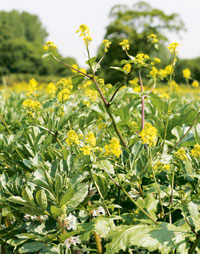 Oilseed rape and pulse growers are being urged to adopt a “back to basics” approach to weed control and reduce their reliance on herbicide products.

ADAS research consultant Sarah Cook highlighted that herbicides were becoming increasingly expensive and many of those that still can be used on either crop were no longer giving the same level of control.

In addition, she highlighted the uncertainty about the future of some commonly used herbicides, such as carbetamide and propyzamide, because they were being detected in watercourses above the acceptable legal limits of 0.1mg/litre.

With just a handful of new herbicides in the pipeline, growers need to explore other options before resorting to herbicides, she said at the HGCA/PGRO Oilseeds and Pulses Conference in Peterborough.

These include drilling into a stale seed-bed, optimising seed rate to suppress weeds, increase crop competition and alter the sowing date. She also encouraged growers who home-save seed to ensure it is weed-free before sowing.

Mechanical weeding in pulses can be just as effective as a pre-emergence herbicide application, Dr Cook said.

But this option was dependent on weed spectrum, type and growth stage, soil conditions and moisture levels, and setting the machine correctly to prevent pulling the crop up.

“Early passes in the direction of drilling are most effective and later passes are more damaging to the crop, so as the crop gets bigger, the damage increases,” she said.

The HGCA is currently researching band spraying glyphosate between rows in oilseed rape crops. Dr Cook believed it could have a valuable role in certain situations, such as controlling chickweed, which can rapidly appear in crops on light land.

• Managing the seedbank – Soil contains many weed seeds in the seedbank, but they generally only appear from the top 5cm of the soil. But some species, such as poppies, lie dormant for years

• Cultivation – Shallow cultivations can encourage weeds to germinate, especially when drilling seed into a moist seed-bed. Ploughing buries a higher proportion of the new seed deeper, but can also germinate a lot of older seed

• Drilling date – Altering drilling date can leave a wide window for weed control. Drilling wheat in October means you could gain an extra month to use non-herbicide methods or stale seed-beds

• Optimising herbicide timing – Should you target weeds with pre-emergence herbicides or wait until after they emerge?