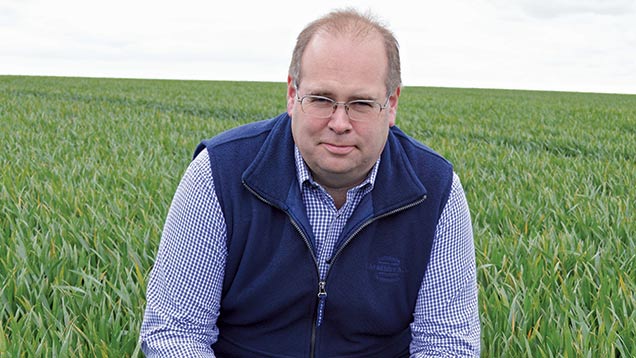 High in the Lincolnshire Wolds Tim Lamyman is plotting to break the world wheat yield record, and the omens look good.

Last summer he set a new UK record and so this time around he hope to go one better and beat the New Zealand-held global best.

So far, so good. The thick, dark green carpet of his wheat on one of the highest points in Lincolnshire looks like a world beater with only three months to go until harvest.

His philosophy is to feed the crop little and often with foliar feeds to meet its growing needs, and so a healthy well-fed crop will be better at resisting debilitating disease.

He opted to sow the new top-yielding feed wheat variety Reflection on his 600ha farm at Worlaby, about six miles south of Louth, as he is impressed by its good standing power, large bold head and a good resistance to mildew disease.

“The Reflection is being aimed at the world record, and so far the crop looks really well,” he tells Farmers Weekly.

The aim is to improve on last summer’s record crop of Kielder, which yielded 14.5t/ha and narrowed the gap on the world wheat record of 15.7t/ha by Mike Solari based near the southernmost tip of New Zealand’s South Island in 2010.

Last season, Mr Lamyman found out his crop had a potassium deficit from leaf tissue testing, so he was keen to find a foliar feed product that supplied nitrogen, phosphate and potash (potassium).

“We tailor our programme to suit the needs of the crop, and the aim is to keep plants healthy and well-fed,” he says.

His chosen field to try and break the world record is the one that produced a world record yield of oilseed rape last year of 6.14t/ha, before being beaten by New Zealander Chris Dennison in January this year with a yield of 6.31t/ha.

This is well-drained land and close to the highest ground he has on his farm, which rises to about 140m above sea level on one of the highest points in the Wolds.

He has also entered a nearby field of Kielder into the Yield Enhancement Network (Yen) run by crop scientist group Adas after he won this yield competition last year with his UK record crop of 14.5t/ha.

This season he is sticking with his generally low seed rate as he is looking for good tillering ability with an aim of 650 heads/sq m by harvest for Reflection, compared with 700 heads for Kielder.

Because of last season’s potassium deficiency, he has adjusted his nine sprays of foliar feeds throughout the year to includes products that include a dose of potash from the first node stage (GS31) through to ear emergence.

For his three autumn foliar feeds he has stuck with Delta, which gives a low dose of nitrogen and prompts the production of cytokinin plant hormones which encourage rooting, along with a 1-4-All product which contains a range of minor elements.

For four of the six feeds in the spring he has replaced the 1-4-All with TipTop, which supplies all three of the major nutrients.

“We were looking for a product to give us nitrogen, phosphate and potassium, as our testing last year showed there was a potassium deficit,” he says.

These foliar products are manufactured by Anglo-Spanish group Ecoculture Biosciences and distributed by Bionature UK. They were originally developed for high-value crops such as strawberries, citrus fruits, cucumbers and melons.

Martyn Pearce, business director and co-founder of Ecoculture, says they were developed for challenging conditions such as the poor soils of East Africa, South America and the Mediterranean region, where plants come regularly under stress.

In the UK, plants also come under stress from lack of water and nutrients, and also night frosts, and Mr Lamyman’s crop had some slight frost tipping on the top leaves in mid-May.

“Stress doubles your problems as it hits the crop and also causes plants to close down and not take up nutrients,” Mr Pearce adds.

Mr Lamyman says his crop went into the winter exceptionally well with very little stress. His crop looked well through the dry and cold months of February, March and April when many nearby crops suffered stress and lost tiller numbers.

He is convinced his foliar feed programme helps with the health of the crop, although he is taking no chances and is applying a full fungicide regime mirroring that of the high disease year of 2012.That means a four-spray programme with two SDHIs, a good mix of azoles and strobilurins and the multisite protectant chlorothalonil with all four treatments.

“No disease has gone up from the bottom leaves, and the crops look so clean,” he says.

Applied nitrogen levels have been pushed up to 330kg/ha from 2014’s level of 260kg/ha with plant growth regulators added to keep the crop standing at these high doses.

Last year, his high hopes of a really big yield were dashed as sea frets and dull weather arrived in the second week of August and remained until harvest in early September.

This caused late attacks of septoria and fusarium and cut the yield and specific weight of his harvested grain.

So far, all looks well, and he has been impressed with the good standing power and earlier maturity of his chosen variety Reflection.

Mr Lamyman is advised by his agronomist Simon Shaw who works for Farmacy, an arm of the advisory and distribution group Hutchinsons.

Adas is running its Yen competition for the third season in a row in an effort to use innovations to break through the yield barrier facing arable growers and help them get close to their potential yields.