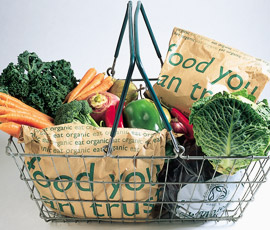 The organic sector has been urged to be more open to GM technology in order to boost future productivity.

Oxfam director of policy and campaigns Phil Bloomer told the Soil Association’s annual conference in London that the organic movement often appeared “insular” and should be more open to techniques such as marker selection, which could dramatically speed up varietal improvement for organic producers.

“I completely understand the Soil Association’s concerns around GMOs. I myself share a lot of concerns about trans-kingdom gene transfer, but the fact is that there are a lot of intraspecies GM modifications that I believe are going to be necessary over the next period.

“Why is it a problem for the organic movement to use marker genes to move high resource efficiency, or high soil nutrient use efficiency from one wheat variety to another in one year rather than the 15 years it currently takes? It’s only about moving those genes in the way that we’ve always done, but doing it in a far faster way.”

Soil Association chief executive Helen Browning said the organic sector was not against techniques such as marker-assisted breeding, but said that transgenic technology could result in less diversity and a concentration of seed ownership.

“We’re interested in a more open technology process that allows farmers to say what they want. We have to be careful not to be taken in by the ‘feed the world’ argument and find ways of meeting our needs without compromising future generations.

“Blind faith in technical sticking plasters is not what we need and simply isn’t working.”

She acknowledged the organic sector needed to build bridges with conventional farmers and scientists to learn from each other and answer those critics that portrayed organic farmers as “luddites”.

“We’re not anti-technology, but we need to reclaim innovation from the technocrats.”