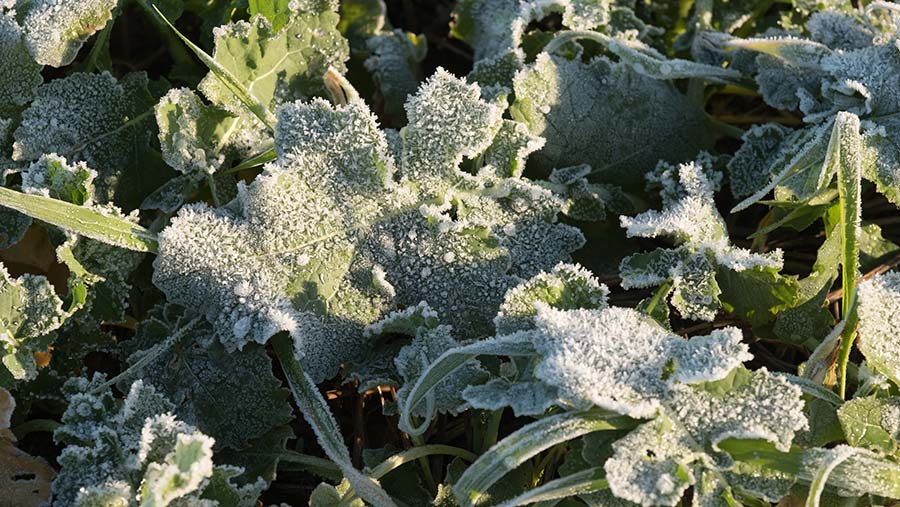 Oilseed rape growers have received an end-of-year boost with the advance of light leaf spot across the country slowing to a crawl thanks to falling temperatures.

Philip Walker, arable plant pathologist at Adas, says once a plant is infected it cannot be cured by the cold weather, but when the mercury falls below 4C, the disease won’t spread any further until temperatures rise again.

Free analysis of leaf tissue samples being conducted by Adas has revealed there have been fresh disease outbreaks in seven more counties in the past three weeks, with the disease spreading further east in Scotland and across parts of England.

See also: Light leaf spot: All you need to know about this OSR disease

There has been one postive disease sample detected in Hampshire, Herefordshire, Leicestershire, Bedfordshire, South Yorkshire, Perthshire and Angus since Farmers Weekly last reported on its spread on 21 November.

There have also been additional positive samples detected in Ceredigionshire, Wiltshire and Shropshire, but less than one-third of the 50 leaf samples analysed between 21 November and 8 December have tested positive for oilseed rape’s most damaging disease, and Mr Walker says the disease picture is by no means bad for the time of year.

Still time to get involved

There has now been a total of 190 samples tested and growers can continue to take advantage of the free Spotcheck service until the end of March.

You can participate in the scheme – initiated and funded by Bayer, conducted by Adas and supported by the Association of Independent Crop Consultants – by contacting Adas at Rosemaund in Herefordshire (01432 820 444) for pre-paid envelopes and then sending in crop samples for diagnosis.

Growers are advised to pick 30 random leaves, as light leaf spot can develop first on newer leaves and phoma on older leaves. The samples should then be sent to Adas.