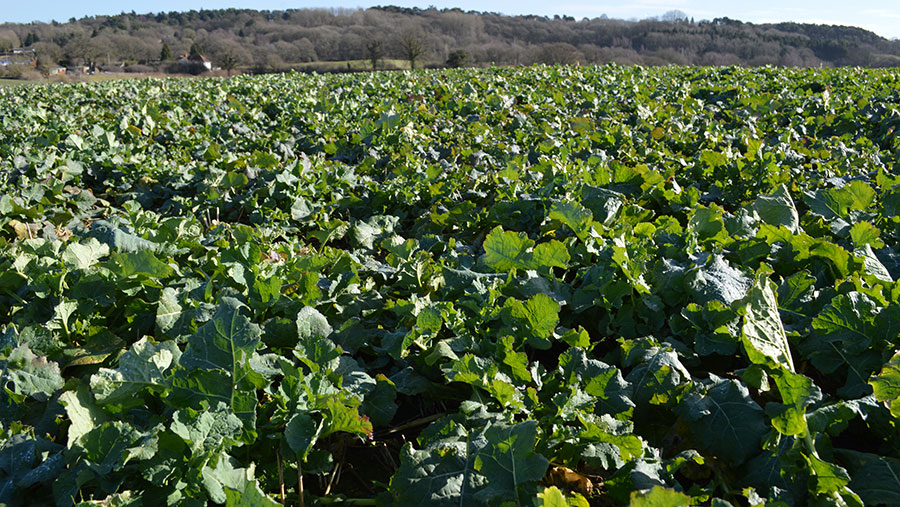 Heavy frosts are helping to restrict the growth of oilseed rape crops on one Berkshire farm keeping it disease-free and potentially leading to some cost savings.

Rapeseed crops on Dan Willis’s farm raced away in the warm and dry conditions last autumn to reach the lower knee level, but colder weather has since then knocked them back.

On his light sandy soils over chalk, rapeseed yields can struggle to reach 3.5t/ha so he is looking to cut growing costs where possible to help improve profit margins.

“Frosts during a cold January have held the crop back and we would hope to save some money on growth regulators and fungicides this spring,” he tells Farmers Weekly.

One block of the variety Mambo had only received one herbicide at pre-emergence this season with no other sprays were used in the autumn on a crop which was strip-till drilled after winter wheat in mid-August.

He believes he can hold back using an early plant growth regulator while the crop is relatively clean of disease so he may not use an early spring fungicide.

Dan and his mother Hazel farm 750ha at Rookery Farms, Curridge, about three miles north of Newbury, on the lower Berkshire Downs, growing wheat, barley, maize and grass as well as 50ha of oilseed rape.