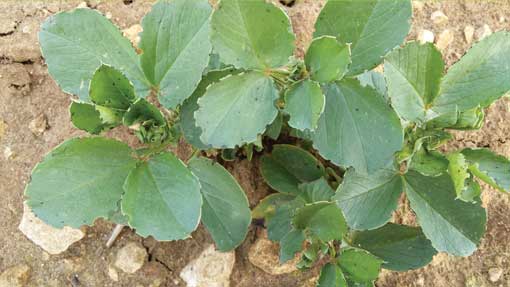 A mild winter and warm early spring mean pulse crops are coming under increasing pressure from pests and will need early treatment to prevent yield loss.

High levels of pea and bean weevil damage have been found in both winter and spring crops according to PGRO agronomist, Becky Ward, who urges growers to assess their fields for signs of ‘U’ shaped leaf notching.

“It is important to get an insecticide on at the first sign of leaf notching to control adult weevils, preventing foliar damage, particularly on spring crops. “This will be key to preventing larval damage to root nodules, which can really contribute to yield loss.”

If the risk of weevil damage remains high, Miss Ward says a second treatment will be needed 10 to 14 days after the first application.

“Most crops have established in favourable conditions with warm soil temperatures, so it will be important to avoid any check in growth if they are to make the best of the good start.”

The mild weather has also prompted early invasion of pea aphids and bruchid beetle with the latter already being seen in some winter crops.

Mr Sanderson says threat of bruchid beetle will be more prominent in winter bean crops that are at early flowering and approaching pod set in the next few weeks.

BruchidCast, an online tool that gives weekly updates, will help monitor this threat offering early warnings of pest activity and assisting with the timing of insecticide applications.

Pea aphids may also pose a threat in both peas and beans according to Miss Ward, who notes that despite being a relatively minor problem over the last two years, growing numbers could be seen this spring if weather remains warm.

“They are beginning to be found in crops, following a mild winter. Several aphid-transmitted viruses are associated with infested crops and can affect both yield and quality – especially if aphids are present before flowering,” she explains